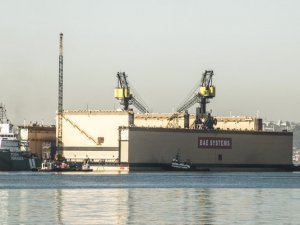 A new 950-foot-long, 55,000-long-ton floating dry dock arrived at BAE Systems’ San Diego shipyard this week, part of the company’s $100 million investment in the yard to service the anticipated increase of U.S. Navy ships on the West Coast.

​The new floating dry dock arrived at the company’s shipyard Thursday towed by the ocean-going and salvage tug Posh Terasea Eagle. Over the next two months, the BAE Systems team will complete final assembly, installation, testing, and certification of the dry dock, which will be operational in early 2017.

The first ship to be serviced in the dry dock will be the San Diego-homeported amphibious transport dock ship USS New Orleans (LPD 18).

While the new dry dock might be the largest in California, the title for the largest dry dock on the West Coast, and the entire United States for that matter, actually belongs to Vigor’s 96-foot-long, 85,000-long-ton “Vigorous” in Portland, Oregon.

This news is a total 937 time has been read
Tags: Largest Dry Dock in California Arrives at BAE in San Diego