Largest Rescue In 19 Years With 2,074 Migrants Plucked From The Mediterranean 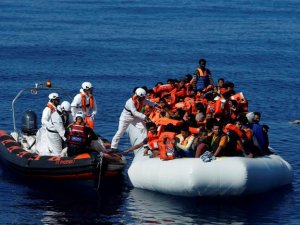 More than 2,000 migrants trying to reach Europe were plucked from the Mediterranean on Friday in a series of dramatic rescues and one person was found dead, officials and witnesses said.

An Italian coast guard spokesman said 19 rescue operations by the coast guard or ships operated by non-governmental organizations had saved a total of 2,074 migrants on 16 rubber dinghies and three small wooden boats.

The medical charity Medecins Sans Frontieres (MSF) said in a tweet that one teenager was found dead in a rubber boat whose passengers were rescued by its ship Aquarius.

“The sea continues to be a graveyard,” MSF said in a Tweet.

The coast guard spokesman confirmed that one person had died but gave no details.

MSF said two of their ships, Aquarius and Prudence, had rescued about 1,000 people in nine boats.

Desperate refugees struggled to stay afloat after they slid off their rubber boat during a rescue operation by the Phoenix, a ship of the rescue group Migrant Offshore Aid Station (MOAS).

Video footage showed rescuers jumping into the water off the coast of Libya to help them.

“In 19 years of covering the Mediterranean migration crisis, I have never experienced anything like today,” said Reuters photographer Darrin Zammit Lupi, who was aboard the Phoenix.

In one operation, the Phoenix rescued 134 people, all from sub-Saharan counties, he said.

Those rescued by the MOAS and MSF ships were transferred to Italian coast guard ships, which had rescued other migrants, to be taken to Italian ports.

According to the International Organisation for Migration, nearly 32,000 migrants have arrived in Europe by sea so far this year. More than 650 have died or are missing.

This news is a total 837 time has been read
Tags: Largest Rescue In 19 Years With 2, 074 Migrants Plucked From The Mediterranean