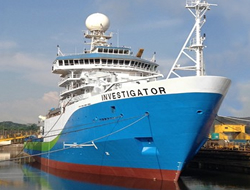 At the end of 2013, the team of Sembawang Shipyard of Singapore and Teekay Shipping Australia will hand over the new scientific Research Vessel Investigator to her owners.

ommonwealth Scientific and Industrial Research Organization (CSIRO), an agency of the Federal Government of Australia.

The Investigator will be among the most capable and quietest non-naval research vessels in the world. It will serve Australia in diverse scientific operations ranging over an area from the equator to the ice shelf of Antarctica and spanning almost 1/3rd of the circumference of the globe. An area this large is hugely diverse and the types of research to be undertaken are numerous and demanding, resulting in the need for a very flexible, capable and seaworthy research vessel.

The “design and build” contract for construction of this ship was awarded to a team led by Teekay Shipping Australia and Sembawang Shipyard of Singapore. The design was developed by RALion, a joint venture between Vancouver BC Naval Architects, Robert Allan Ltd, Alion Science and Technology of Alexandria, Virginia and Alion Canada of Ottawa. The contract was awarded to this international team in January 2011. An extensive program of model testing and design work was completed by November of that year. The vessel was launched on July 21st, 2013 and then officially named Investigator at a ceremony in Singapore on September 5th.It is due to be completed and turned over to the Owners at the end of 2013.

Investigator has been designed to handle the heat and humidity of the tropics and the cold and ice of Antarctica while working safely and effectively in the broad expanse of the Great Southern Ocean separating these extremes. This ice capable vessel has also been designed to meet the underwater radiated noise requirements of the DNV “Silent R” notation up to 11 knots – a capability that enables her to undertake the most sensitive types of environmental research.

This news is a total 1330 time has been read