Largest vessel on the way 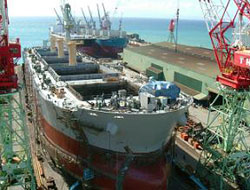 The Union Minister of Shipping, Road Transport & Highways, Thiru. T.R. Baalu yesterday presided over the naming ceremony of M.T. Desh Viraat, which is a Very Large Crude Carrier built by Daewoo Shipbuilding and Marine Engineering (DSME) at Okpo Shipyard in Republic of Korea.

M.T. Desh Viraat, with a capacity of more than 3.190.000 DWT, is the largest crude-oil vessel under the Indian Registry and is also the largest size of VLCC made for our country.

Speaking on the occasion, Thiru. Baalu said that M.T. Desh Viraat is the first of two Very Large Crude Oil Carriers being delivered by this shipyard to the Shipping Corporation of India (SCI).

The Minister congratulated the DSME and the SCI for successful completion of this project. The Minister said that the service of this vessel would be crucial to the nation as the country"s energy requirements are continuously on the rise and India"s proven crude reserves are limited, import of crude oil is inevitable.

Apart from serving national interest, the vessel would also strengthen SCI"s fleet base, since energy transportation continues to remain the core business segment of SCI, the Minister added.

?In case the DSME continues to provide shipbuilding offers to the Indian shipowners and the SCI at competitive prices, I am sure it would be of benefit to both the organisations?, the Minister added.

Recalling the elevated bilateral relationship between India and South Korea, the Minister noted that the two-way trade has been witnessing robust growth and the bilateral trade volume has gone up more than two and a half times in the last four years.

He said that the trade in the calendar year 2007 was $ 11.2 billion whereas the first eight months of the calendar year 2008 have already witnessed a bilateral trade volume of $ 10.9 billion. ?I am overwhelmed to notice that the investment of the Republic of Korea in India has crossed one billion dollar mark?, the Minister emphasized.

This news is a total 956 time has been read