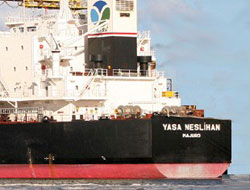 Pirates: We won"t release the ship without ransom.

Having a satellite phone connection to the pirates, who hijacked the Marshall flagged ship Yasa Neslihan owned by Yasa Navigation Company, Turkish Maritime Magazine drew information about the health status of the crew.

Having a contact to the pirates over satellite phone, who hijacked the Marshall flagged ship Yasa Neslihan, Turkish Maritime Magazine got information about the health status of the crew.

Turkish Maritime Magazine Foreign News Editor Sevnur Çakmak, who came into contact with the pirates over satellite phone, took the words out of pirates" spokesman about present situation of the ransom negotiations.

The spokesman of the pirates, who introduces himself as Muhammed Abdullah told that for the pirates to release the ship, the ransom definitely had to be paid.
The spokesman of the pirates told that by negotiating no progress had been made and indicated that they would terminate the negotiations any moment and they would not release the vessel without receiving the ransom. Expressing the crew consisting of 20 Turkish seafarers to be healthy and in a good condition, the pirate Muhammed Abdullah indicated that there was nothing going wrong on the ship.

Despite persistent efforts made by Sevnur Çakmak, Turkish Maritime Magazine Foreign News Editor, the pirates didn"t answer in the affirmative and broke the connection off by hanging up the phone.

Legal advisor Fehmi Ülgener: The negotiations are not cut