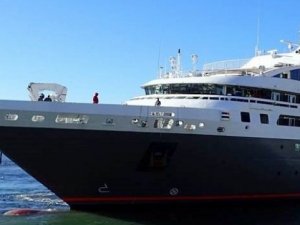 The incident occurred at about 0530 on February 9, 2017 when L’Austral began its entry to Milford Sound. Because it was dark and there were no external visual navigation aids, the bridge team was using only the ship’s electronic navigation systems to conduct the “blind pilotage.” As the ship was making a turn off Dale Point, the pilot lost awareness of exactly where the ship was, the direction in which she was heading and the effects of the wind and tide.

The Commission found that the ship’s crew on the bridge noticed the ship was off its planned track but did not bring this to the pilot’s attention until it was too late. It also found that the bridge team were not making full use of the ship's electronic navigation systems.

The L’Austral struck a stony bank and suffered scraping and indentation of the hull on its starboard side. However, the hull was not breached and nobody on board was injured.

•  the primary means for navigation on board the L’Austral, the electronic chart display and information system, was not being used to its full potential as a tool for planning and monitoring the ship’s passage, and the crew were not fully conversant with its safety features
•  the standard of bridge resource management on board the L’Austral during the Milford Sound pilotage did not meet good industry practice
•  conducting “blind pilotage” with large ships in confined waters represented risks that had not been fully considered by Environment Southland, the regional authority that regulates maritime activity in the area.

The Commission had previously found that poor bridge resource management under pilotage was a factor contributing to accidents involving two other ships in New Zealand. It notes that a ship’s passage plan is more than just the planned track for the ship to follow. Every part of a ship’s voyage must be planned and all members of the bridge team be fully familiar with and agree to the plan. Good bridge resource management relies on a culture where challenge is welcomed and responded to, regardless of rank, personality or nationality, stated the Commission.

This news is a total 401 time has been read
Tags: L'Austral Grounding: Loss of Awareness during “Blind Pilotage”