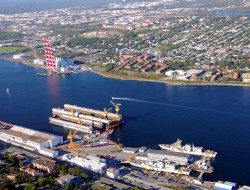 Canadian police have arrested a man and charged him with trying to leak classified information related to the countrys national shipbuilding strategy to the Chinese government.

Irving Shipbuilding is spending C$300 million ($282 million) to overhaul its Halifax, Nova Scotia, shipyards to prepare for its share of a C$33 billion contract to build ships for the Canadian Navy and Coast Guard starting in 2015. Bolstering Canada’s sovereignty by beefing up its naval presence in the Arctic, Pacific and Atlantic oceans has been among Prime Minister Stephen Harper’s stated priorities in recent years.

“It’s a real concern,” Industry Minister James Moore told reporters today in Montreal when asked about the arrest. “We think we have the framework in place to protect Canadians.”

Huang is from Waterdown, Ontario, and was arrested last weekend in nearby Burlington, Tremblay said. The RCMP learned of his attempts to spread the information to the Chinese on Nov. 28, Tremblay said. He has been charged under the Security of Information Act with two counts of attempting to communicate information of national security to a foreign entity.

Huang will appear at the Old City Hall courthouse in downtown Toronto on Dec. 4, RCMP Sergeant Richard Rollings said by telephone. The RCMP doesn’t typically disclose where those arrested are being held, and Rollings said he didn’t know any details of who, if anyone, was representing Huang legally.

“In these types of cases, sharing of information may give a foreign entity a tactical, military or competitive advantage by knowing the specifications of vessels responsible for defending Canadian waters and Canadian sovereignty,” RCMP Chief Superintendent Jennifer Strachan said in a statement yesterday.

Deborah Page, a spokeswoman for Irving Shipbuilding, said the man was never employed at the company or on its property. Huang didn’t have security clearance or access to classified information, she said.

“We have been doing anything we can to assist the RCMP investigation,” Bud Streeter, president of Lloyd’s Canada, said in a telephone interview yesterday.

Huang is employed as a structural and design appraisal engineer at Lloyd’s Register’s Burlington office and his main work was to assess and approve whether ship designs are compliant with Lloyd’s and other international standards, said Streeter.

Lloyd’s has about three of its 100 Canadian employees with the requisite security clearance working on the government’s national shipbuilding strategy. Huang wasn’t among those and instead was working for commercial clients, Streeter said.

Huang has been suspended without pay and will remain away from the company until the matter is resolved, Streeter said.

This news is a total 1407 time has been read