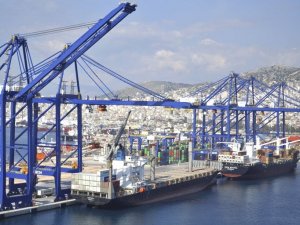 China's spending on overseas ports has doubled in the past 12 months as state-backed firms lead Beijing's belt and Road charge.

A study by Grisons Peak, a London-based investment bank, found that Chinese companies have announced plans to buy or invest in nine overseas ports in projects valued at a total of $20.1bn, in the 12 months to the end of June. In addition, discussions are underway for investments in several other ports, for which no value has been divulged.

In the same 12-month period through to the end of June 2016, Chinese companies spent $9.97bn by comparison.

The locations of the ports set for Chinese investments are clustered around three ''blue economic passages'' that Beijing named in June as crucial to the success of One Belt, One Road, the giant infrastructure development project linking Asia with Europe.

This news is a total 634 time has been read
Tags: Leap in Chinese overseas port investments