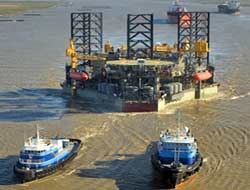 The $130 million export is being supported by a $54 million Ex-Im Bank-guaranteed loan to the foreign buyer from BBVA Bancomer of Mexico City.

Backed by the support of a long-term loan guarantee from the Export-Import Bank of the United States (Ex-Im Bank), LeTourneau Technologies Inc., of Longview, Texas, delivered its mobile jack-up oil-drilling rig, named PANUCO, to a subsidiary of Perforadora Central S.A. de C.V. of Mexico on Monday, June 18.

The $130 million export is being supported by a $54 million Ex-Im Bank-guaranteed loan to the foreign buyer from BBVA Bancomer of Mexico City.

It is the first Ex-Im Bank transaction under its master guarantee agreement with BBVA Bancomer and is also the first financing of a mobile drilling rig to be guaranteed by Ex-Im Bank.

The LeTourneau designed and built Super 116E mobile jack-up rig is capable of operating in water depths of up to 350 feet. It is LeTourneau's first complete rig export to the Perforadora Central Group, which provides onshore and offshore drilling services and other operations almost exclusively for Mexico's national oil company, Petr—leos de Mexico (Pemex). The rig is to be leased to Pemex.

In this structured-finance transaction, Ex-Im Bank is providing a guarantee of 8.5 years of a total 10-year loan from the guaranteed lender, BBVA Bancomer.

Ex-Im Bank's support was needed because drilling rigs are capital-intensive investments that have useful "lives" exceeding 20 years and require longer repayment terms, which commercial lenders may not be able to provide without the Bank's support. Ex-Im Bank's guarantee was also needed because the Perforadora Central Group did not have a lease contract at the time that the construction contract was signed. Drilling rigs are normally operated under a series of short-term lease contracts. Ex-Im Bank structured its financing to accommodate this arrangement.

"The Perforadora transaction is a good example of how Ex-Im Bank can make a critical difference for U.S. exporters involved in large capital-goods projects," said Ex-Im Bank Chairman and President James H. Lambright. "Our structured and project finance products can help U.S. exporters win international contracts that require long-term financing that otherwise would not be available."

"Through this transaction, Ex-Im Bank assisted LeTourneau in providing U.S. jobs in the manufacture and construction of our jack-up rigs and related drilling equipment. This support also helped our U.S. suppliers, many of which are small businesses," said Robert K. Rimlinger, senior vice president and general manager of LeTourneau's Marine Group.

LeTourneau Technologies Inc., a subsidiary of Rowan Companies Inc., has its headquarters and manufacturing plant in Longview, Texas, and its shipyard in Vicksburg, Miss. LeTourneau has approximately 2,600 employees, including about 1,150 workers at its shipyard. The company also sources components and materials from a large number of suppliers throughout the United States.

LeTourneau Technologies Inc. delivers the mobile jack-up rig PANUCO, from its shipyard in Vicksburg, Miss., to Sabine Pass, Texas, en route to final delivery to a subsidiary of Perforadora Central S.A. de C.V. in Mexico. The $130 million export is being supported by a $54 million Ex-Im Bank-guaranteed loan to the foreign buyer from BBVA Bancomer of Mexico City.

This news is a total 1232 time has been read