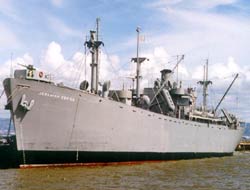 ?Liberty? class cargo ships, which served during the World War II, is expected to arrive in Hellas.

?Liberty? class cargo ships, which served during the World War II, is expected to arrive in Hellas

After almost a month and a half the last of the ?Liberty? class cargo ships, which served during the World War II, is expected to arrive in Hellas and more specifically the port of Piraeus by the end of the week, in order to be transformed to a floating museum. It will depict the Hellenic maritime history from the end of the World War II and up to about ten years ago, when the last Liberty ship was put out of service.

Restoration works will begin in the shipyards of Skaramanga in the area of Elefsina for an estimated cost of $5 million, while already a sum of $1.5 million has been devoted to the vessel for repairs. The ?Arthur M. Hantel? is one of the three remaining American ships of the "Liberty" class. The whole effort will be completed after a three-year effort (from February 2005) which achieved its first success in June of 2006, when the U.S. Congress ratified a special law on granting the ship to Greece in the form of a donation. A considerable role in the ratification of the law was played by Greek American Rhode Island Senator Leonidas Raptakis.

The vessel will be renamed ?SS Hellas Liberty? after the initiative undertaken by Mr. Spyros Polemis, one of the most prominent ship owners of the country, whose effort was also praised by Capt. Vassilis Konstantakopoulos, another major shipping entrepreneur. The emotional link between the Hellenic maritime community and Liberty vessels is very significant, because it was thanks to them, that the country managed to form such a strong and leading presence in the shipping industry, not to mention that thousands of Greek seafarers served onboard Liberty vessels during the war. After the fall of Nazism, 100 Liberties were given to local ship owners by the U.S. government on favorable terms. These vessels were then the backbone, on which the country"s mercantile marine industry was built and developed.

This news is a total 1910 time has been read