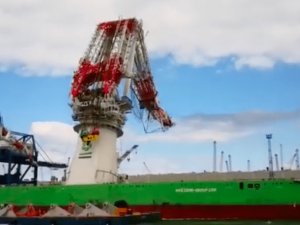 Crane manufacturer Liebherr-MCCtec Rostock has addressed the crane collapse on board newbuild offshore installation vessel at a Liebherr yard in Rostock, Germany earlier this month.

In a statement, the company said the accident during an overload test of the crane was the result a broken crane hook provided by a third-party supplier.

The incident took place May 2 during load testing of a 5,500-tonne capacity Liebherr-MCCtec Rostock HLC 295000 crane on board the Orion 1, a newbuild offshore wind installation vessel being built for DEME.

The vessel, which is under construction by COSCO (QIDONG) Offshore, arrived at the Liebherr construction yard last November for installation of the crane – the final phase in the construction process.

“At this point we wish the injured persons all the best and hope for a full and speedy recovery,” said Leopold Berthold, Managing Director of Liebherr-MCCtec Rostock GmbH. “Considering the extent of the damages, we are above all thankful that it did not cause more personal injuries. Our priorities currently lie in fully supporting the investigating authorities in order to contribute to the quickest possible clarification of the accident,” added Berthold.

At this stage in the investigations, the responsible authorities and experts unanimously agree that a broken crane hook was the cause of the accident, Liebherr said in a statement.

“The exact reasons as to why the hook did not withstand the load are unclear at this stage of investigations. The design and manufacture of the crane hook was purchased from an external supplier. A design or production error of the Liebherr crane can therefore be excluded,” the company said.

The overload test that led to the accident was planned for to reach 5,500 tonnes, the crane’s maximum capacity, however the failure of the crane hook took place at 2,600 tonnes, well below the maximum.

“The lift should have been carried out through the hoisting of a barge. Carrying out an overload test is a typical procedure for the industry, whereby the crane is tested for its maximum lifting capacity. Currently known facts indicate that the incident occurred at a load of around 2,600 tonnes causing a chain reaction which led to the accident,” Liebherr said.

The Orion 1 was planned to install 103 jackets at the 950MW Moray East offshore wind farm in Scotland immediately upon delivery later this month.

This news is a total 2503 time has been read
Tags: crane collapse, incident video