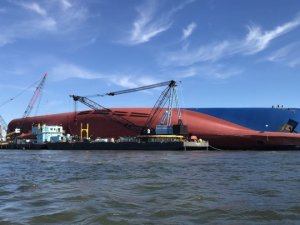 All oil on board the overturned vehicle carrier Golden Ray has now been removed, the St. Simons Sound Incident Response Unified Command said Monday, a major milestone in the salvage of the vessel more than three months after its grounding,

During the lightering operation, salvage workers and divers were able to gain access to 26 fuel tanks inside the Golden Ray in order to pump fuel into a barge for proper disposal. With some of the tanks submerged, they could only be reached by rappelling and conducting dive operations inside the wreck. The interior of the tanks were then washed with steam to remove residual fuel, which was collected and transferred into containers.

More than 320,000 gallons of oil and water mixture were removed, the Unified Command said.
The Unified Command, however, continues the forensic investigation in order to determine an exact volume of fuel onboard at the time of the incident and the amount discharged.

“I’d like to thank the over 500 women and men who assisted in every aspect of this successful operation,” said Chris Graff of Gallagher Marine Systems. “We’ve relied on the Brunswick community and experts around the world to reach this point and are grateful to all those who contributed”

Due to the environmental threat, the salvage will consist of removing all cargo and components from the vessel and cutting it up in place in St. Simons Sound.

To improve the stability of the wreck, Unified Command has begun the removal of the vessel’s propeller, propeller shaft and rudder, which weighs a total of approximately 130 tons.

“Due to the vessel’s orientation on its side, these components are creating a load which the vessel was not designed to support,” said Chief Warrant Officer Jeremiah Winston, Unified Command Salvage Branch director. “Imagine holding a milk jug with an outstretched arm compared to the same weight hanging at your side. Removing these components will help reduce the stresses on the hull. This operation will help sustain the integrity of the wreck while we prepare for its full removal.”

The Golden Ray was carrying about 4,200 vehicles when it lost stability and grounded in St. Simons Bay as it departed Georgia’s Port of Brunswick on September 8th. Twenty-three crew members and one pilot were evacuated safely.

“The completion of the fuel removal allows the Unified Command to move on to our ultimate goal of safely removing the wreck of the Golden Ray. Removal of the vessel will be a highly complex and challenging operation,” said Commander Matt Baer, U.S. Coast Guard. “Unified Command will take every possible measure to ensure the safety of those involved in the operation, the public and the environment.”

This news is a total 231 time has been read
Tags: golden ray car carrier, salvage

Germany Cruises Set to Resume While British Advise Against CruisingAs travel restrictions are beginning to be lowered and ports begin to reopen, three of Germany’s cruise lines announced dates to resume ocean cruising.