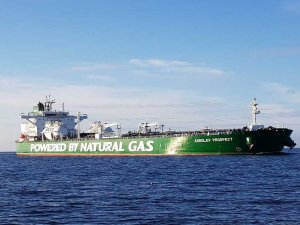 Sovcomflot UK’s managing director Callum Ludgate outlined how the group selected a means of emissions-reduction on its vessels, settling on dual-fuel LNG propulsion

Speaking at the launch of DNV GL’s Energy Transition Outlook 2019 event as part of London International Shipping Week, Mr Ludgate explained that Sovcomflot’s energy strategy is one of transition:

“You are looking to reduce what you are putting into the atmosphere and into the environment, but it has to be practical.

There was no single factor that led to Sovcomflot opting for dual-fuel LNG engines, Mr Ludgate said, but rather a range of competing considerations. The first was whether there was a business case for new vessels to be built – in Sovcomflot’s case, it needed to replace its fleet of ice-class Aframax vessels servicing exports from the Russian Federation via the Baltic Sea and the UK Continental Shelf.

This led to considerations based around the geographies the vessels would operate in. For example, both the Baltic and the UK Continental Shelf are governed by the 0.1% sulphur content limit as emission control areas, making them even more stringent than IMO’s 2020 0.5% sulphur cap.

With this in mind, Sovcomflot looked at where their vessels tended to burn most of their fuel, and found they spent about 40% of their time in port. On this basis they decided open-loop exhaust gas cleaning systems would not be suitable, given that a lot of this would be spent in freshwater environments where many northern European refineries tend to be located. Other factors included fuels likely to be available in the operational geographies and pricing.

Tank capacity was also an issue, with tanks needing the maximum possible capacity while remaining in compliance with terminal safety requirements.

The additional capex required for the dual-fuel solution was determined to be between US$8M-US$10M, with additional opex of US$500 per day for LNG.

Sovcomflot therefore determined that an LNG-powered tanker would be the optimal solution for large-scale shipping in sensitive geographies with tight emissions controls, and its LNG-powered Aframax has the following specifications:

“It [LNG] works for us in the geography and the trade that we operate,” said Mr Ludgate, adding “It is still nascent and to look at it on a global basis, everyone must look at the key decisions they are making before they take the step of going for LNG themselves.”

Sovcomflot’s fleet of vessels operating primarily on LNG propulsion represent roughly 10% of its total fleet and includes six Aframax tankers already in service, with a further two Aframax and three MR tankers under construction and five tankers in prospective technical management. By 2025, the company expects LNG-fuelled vessels to make up 30% of its fleet, or 40 or more vessels.

The Russian Government is keen to promote the Northern Sea Route as an alternative to travelling via the Cape of Good Hope or Suez Canal for vessels travelling between Europe and Asia, but also wishes to limit the emissions profile of vessels operating on that route to protect the Arctic environment. Sovcomflot vessels have already made three transits on the Northern Sea Route, one in ballast and two laden, Mr Ludgate said. On 2 September, it was announced Sovcomflot’s Korolev Prospect was the first crude oil tanker to transit the Northern Sea Route using only LNG fuel.