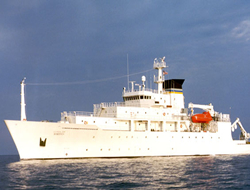 Besides obliterating entire villages, killing thousands, and otherwise creating an incredible mess of the Philippines, Super Typhoon Haiyan and its resulting storm surge wreaked havoc to a large swath of area that cannot be seen by any photo in any newspa

Had the U.S. Navy not taken this into account, their relief effort involving vessels serving as launch points for the airborne assault of medical supplies, food, water and other aid may have been hampered by those vessels running aground on sand bars or other obstacles on their now obsolete chart data.

Enter the Military Sealift Command-operated USNS Bowditch (T-AGS 62), a U.S. Navy vessel purposely built to survey the seafloor, and one of the first vessels on scene in the Philippines.  This ship was actually anchored in the Philippines immediately before the storm hit and had sortied in advance.

Bob Freeman from the Office of the Oceanographer of the Navy notes in a Navy press statement that the Bowditch “began immediately surveying the approaches to San Pedro Bay to ensure naval relief efforts [were] conducted safely, and Navy ships [could] get as close to land as possible.”  The ship was tasked to survey from the 200 meter depth line in towards the shore of San Pedro Bay.

“We performed similar roles in the 2004 Banda Aceh tsunami and the 2010 earthquake that devastated Haiti,” explained Chris Kent, deputy operations officer for the Naval Meteorology and Oceanography Command. “In both cases, Navy survey ships and aircraft went in first to chart the approaches.”

www.turkishmaritime.com.tr
This news is a total 2085 time has been read