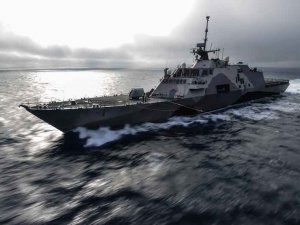 The U.S. Navy is investigating a casualty to one of the main propulsion diesel engines (MPDE) on board the first littoral combat ship USS Freedom, which the Navy says will need to be removed and rebuilt or replaced altogether.

The Navy said Monday that the casualty occurred July 11 and was caused by a leak from the attached seawater pump mechanical seal that resulted in seawater entering the engine lube oil system.

“The crew took action to address the leak, and Freedom returned to homeport July 13 on her own power to conduct repairs on a separate, unrelated issue,” the Navy said in a press statement. “While in port, the crew performed seawater contamination procedures. From July 19-28, the ship returned to sea to complete its portion of the Rim of the Pacific (RIMPAC) exercise using gas turbine engines rather than its MPDEs.

“Upon returning to port, Southwest Regional Maintenance Center’s Diesel Engine Inspector (SWRMC DEI) conducted a diesel engine inspection of USS Freedom’s #2 MPDE on August 3 and found significant damage to the engine caused by rust and seawater. Based on initial assessments from the inspection, Freedom’s #2 MPDE will need to be removed and rebuilt or replaced. The cost and timeline for the repair of the engine are unknown at this time. An investigation by Commander, Naval Surface Force, U.S. Pacific Fleet (CNSP) is underway to determine the definitive cause of the casualty and examine all relevant elements of training and supervision.”

The casualty is the latest in the growing list of issues related to the Navy’s beleaguered Littoral Combat Ship program. Back in January, the USS Fort Worth (LCS 3) was sidelined in Singapore after suffering damage to the ship’s combining gears. The ship was expected to return San Diego under its own power this summer for an extensive repair period. Earlier in December 2015, the USS Milwaukee (LCS 5) had to be towed into port after losing propulsion during an Atlantic Ocean transit, just one month after being commissioned.

“Given the engineering casualties on USS Freedom and USS Fort Worth, I believe improvements in engineering oversight and training are necessary,” said Vice Adm. Tom Rowden, commander, Naval Surface Forces. “The recently completed LCS Review of manning, design, and training looked at a number of sailor performance and ownership factors, to include crew rotation, size and proficiency. From this work, I believe we will be able to make immediate changes to help reduce chance for future operator error. I am fully committed to ensuring that our ships and the Sailors who man them have the proper tools and training they need to safely and effectively operate these ships.”

The CNSP investigation will review if the significant damage to the #2 MPDE was caused by a mechanical failure or crew error or both. Based on those results, CNSP will determine any necessary corrective actions, the Navy said.