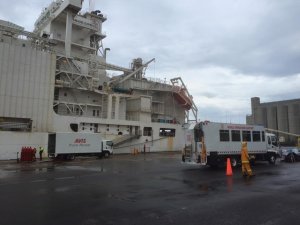 A livestock carrier caught fire Tuesday evening while docked at the Port of Portland in Victoria, Australia, according to the local Country Fire Authority (CFA).

The livestock carrier, identified as the Panama-flagged Awassi Express, was not carrying any livestock at the time of the incident.

CFA was called to the port around 8 p.m. local time on Tuesday, after smoke was reported issuing from a silo on board the 1990-built ship. The fire was contained at around 12.30 a.m. to an 800-tonne grain hopper.

“Crews worked throughout the night on the fire. The focus for firefighters today is to extinguish the fire by this afternoon,” said CFA’s District 4 Duty Officer Henry Barton.

“The hopper is the size of a three-storey building and it’s continuing to smoulder. There was fire in the early hours of this morning with steam and smoke coming from the vessel.”

No injuries to the crew of the ship or the firefighters have been reported, and the cause of the fire is currently being investigated.

The Awassi Express was converted from a 2,300 TEU container vessel into a livestock carrier with approximately 22,000 sqm of livestock capacity, and has been transporting livestock from Asia to Australia since June 2014.

The ship is owned by Hamood Al Ali Al Khalaf Trading and Transportation Est. of Saudi Arabia, and managed by the Singapore-based Global Radiance Shipmanagement.

This news is a total 3004 time has been read
Tags: Australia, Awassi Express, fire, Livestock Carrier, Port of Portland.