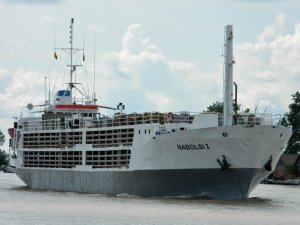 A livestock carrier caught fire on August 1 off the Greek island of Crete while en route from Lebanon to Alexandria, Egypt, according to local media.

The 1972-built Nabolsi I is currently situated off Crete’s southern coast, near the town of Lerapetra.

Hellenic Coast Guard has dispatched one patrol ship to fight the flames. Two NATO ships are also reportedly engaged in containing the blaze onboard the 1,405 dwt livestock carrier.

The reason for the fire is yet unknown, and there have been no reported injuries thus far. The reports do not say if the vessel’s crew are still onboard.

The extent of the damage to the vessel will be determined once the rescue crews manage to contain the fire. The Nabolsi I is owned by the Greek company  RJA Group, and operated by Beirut-based Rania Marina.

This news is a total 1762 time has been read
Tags: livestock, carrier, fire, crete, turkishmaritime