Livestock Carrier With 43 Crew Feared Lost in Typhoon off Japan 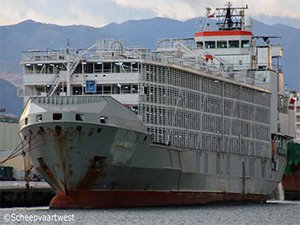 Four coast guard vessels and airplanes are reportedly conducting the search-and-rescue operation. It, however, was suspended until daylight Thursday local time.

A Panamanian-flagged livestock carrier with a crew of 43 is feared lost southwest of Japan after encountering a typhoon moving across the region. Japan’s Coast Guard reported receiving a distress call and later finding one seafarer in the ocean with a life jacket and an empty lifeboat. No additional signals were received from the vessel after the first distress call.

The search for the missing vessel believed to be the Gulf Livestock 1 was conducted all day on Wednesday, September 2 local time. Four coast guard vessels and airplanes are reportedly conducting the search-and-rescue operation. It, however, was suspended until daylight Thursday local time.

Before calling off the search the Japan Defense Ministry reported that they had located one person apparently in the ocean in the area of the last known position of the vessel. Media in Japan are saying that the Coast Guard reported it was a male Filipino crew member and that he was in non-life-threatening condition. In addition, an empty inflatable life raft was reportedly spotted but it is unclear if it was from the Gulf Livestock 1.

The Coast Guard reported that it had received a distress call at approximately 1:45 a.m. September 2 that was believed to be coming from the 8,372 DWT Gulf Livestock 1 operated by Gulf Navigation Holding, headquartered in Dubai, UAE. The vessel, which was reported to be 185 km west of Amami-Oshima Island, which is located southwest of Japan. It was carrying a crew of 43, including two Australians, two New Zealanders, and 39 Filipinos, as well as a cargo of 5,800 cattle.

The vessel’s last known position in the East China Sea would place it in proximity to Typhoon Maysak. The Coast Guard reports that bad weather with strong winds and torrential rain took place in the area. At 2 a.m. on September 2, the storm was reported to be at category 3 with winds at 115 mph.

The Gulf Livestock 1 had departed Napier, New Zealand on August 14 bound for Tangshan, China. She was reported to be sailing at a speed of 8 knots due to arrive in China on September 4.

The 440-foot vessel was built in 2002 in Germany first operating as a cargo ship named Maersk Waterford and Dana Hollandia. In 2012, she was converted to a livestock carrier operating under the name Rahmeh. In April 2019 during a livestock voyage from Australia to China, she was renamed Gulf Livestock 1.

This news is a total 2826 time has been read
Tags: Livestock Carrier With 43 Crew Feared Lost in Typhoon off Japan