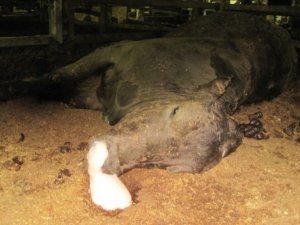 In the fourth of a searing series for Splash, leading Australian livestock expert Dr Lynn Simpson explains what happens when things get too hot below deck: “like a cross between a Sunday roast and roadkill”.

Unbelievably, some animals literally cook to death as we sail on live export ships.When I started sailing in 2001, I ate all meats. After too many heat stress affected voyages I cannot stand roast sheep, disappointing many a farmer host. There is very little difference in my view to slow cooked meat and bodily decomposition post death.

I don’t need to watch cooking shows, I’ve watched it happen on the hoof.This risk on live animal export vessels is greatest during mid-year when we (Australia) take winter adapted animals to the northern hemisphere summer. That time is now. Our cargo (sheep and cattle) can literally cook to death from environmental heat stress when our wet bulb deck temperatures exceed 30 degrees Celsius and the humidity is in the high 80s and above and or if they have existing diseases such as pneumonia as with the picture of the dead bull with the foaming nose; a classic sign.

Humidity is the killer. We could be in Kuwait in 50 degrees dry bulb temperature, but low humidity (below 70%) and things are fine.Once that wet bulb creeps up, we are in trouble.Sheep appear more vulnerable. Is it the double-tiered decks, the stocking densities, the fact that they wear wool? Or all the above? Probably a combination.

When we sail through notorious heat risk areas such as the Gulf of Aden, the Straits of   Hormuz or the Persian Gulf everyone onboard is on heightened alert for the signs that we may be minutes away from a mass mortality and animal welfare disaster. The deck crews watch closely, the vet and stockmen pace around trouble spots and the navigational officers watch the cargo keenly from the bridge windows if possible. Everyone’s radios are on the ready.

The very minute signs appear everyone jumps into action.The signs include animals literally gasping for breath with their tongues out, quickly turning blue from lack of oxygen. Respiratory rates are in the two hundreds per minute. Too high to reliably count with the human eye. The air fills with toxic levels of ammonia and CO2 as it depletes of oxygen. And it’s bloody hot!

Any ship nearby must think we have developed either a drinking or a steering problem as the bridge and the engine room coordinate quickly to begin ‘swinging the ship’. This appears on other vessels’ radars as if we are zigzagging. We literally turn the ship sharply to try to catch some crosswind and flush the buildup of toxic gases from the open decks and replenish them with fresh air full of life giving oxygen. We then turn back and repeat this at approximately 15 minute intervals until the cargo begins to show signs of relief, or the wind picks up and takes over. If really bad, we turn 180 degrees and sail into a following or stern breeze. If we are in narrow sea traffic lanes or there is lots of sea traffic around us, we are stuffed. Animals die before a ship collision would occur.

The captains on these vessels show great courage at these times.

A higher risk is whilst unloading in some ports, when zigzagging is not possible. In these times we have tug boats on standby in case the situation gets unbearable and we have to stop unloading our cargo and rush back to sea for fresh air, hoping it happens in time to save lives.

Other mitigation strategies include not feeding animals in the hours preceding highest calculated risk, reducing their internal temperature. Removing any barrier to crosswind such as feed troughs.
When a heat stress event occurs all hands are on deck immediately, the ship swings and all barriers possible are removed. The animals usually exhibit the extension of their necks out over the railing desperately seeking oxygen. Their bodies heat up from external environmental heat and internal friction of breathing. The heart increases beating as the affected animals dehydrate, their poorly oxygenated blood gets thicker and harder to move around their bodies.

They begin to compete for air supply vents, the strongest climbing on the weakest for air clearance. As they weaken they collapse, lose consciousness and soon die. The normal body temperature of a sheep is around 38.5 degrees. One day we had an entire deck behaving as described, we were losing them. They were dropping around us like they had been shot in the head. Except there was no bullet. As they hit the deck we would drag them out and I would cut their throats. One day as I was cutting heat stressed throats for mercy kills, I had a strong spray of blood from the throat scold my wrist.

Brain damage in humans is a concern if the body temp gets above 41 degrees Celsius. I was sure these animals would never recover once collapsed, and I feared the survivors would die slowly within a week from kidney failure. Kill, kill kill. The next sheep I cut I also used the deck thermometer to measure his core body temperature. I was blown away to find it was 47 degrees Celsius. About the same temperature of the average household hot water system. Their fat was melted and like a translucent jelly. They were cooking from the inside.

As such their muscles were discoloured. They were decomposing in front of our eyes. This is a grisly task for all on deck. The crew are already risking their lives working in such a toxic environment. Safe working ammonia levels should never exceed 25ppm. These were far exceeded. Then we are all expected to begin removing the dead bodies and throw them into the ocean. If this process is delayed the job gets harder and more disgusting. Legs literally pull off as you try to drag them and they simply fall apart. You have to make haste with the waste.

And the deck smells like a cross between a Sunday roast and roadkill.

This news is a total 4494 time has been read
Tags: Livestock cooked alive at sea, Unbelievably, türkishmaritime