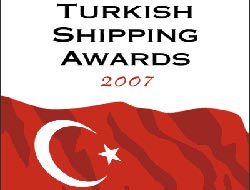 Cengiz Kaptanoglu, one of Turkey’s most respevted figures on the international maritime satge, was last night honoured for lifetime achievement at the inaugural Lloyd’s List Turkish Shipping Awards at the Ciragan Palace Kempinski Hotel in ?stanbul.

Around 300 people from the shipping industry gethered in the palatial surroundings of the hotel to pay tribute to Mr Kaptanoglu, whose curriculum vitae includes chairman of Kaptanoglu Corp, Chairman Of the Chamber of Shipping and member of parliamanet for, in the words of the distinguished panel of judges “co-ordinating the forces of modern Turkish Shipping.”

In the Turkish shiiping personality category, Yalcin Sabanci beat of strong challneges from other leading figures in the Turkish maritime circles “for his vidion and sense of timing in building a world-class fleet in record time.”

Earlier in the evening, presideded over by master of ceremonies Rana Erkan, Bayraktar Shipping Group picked up the dry cargo company award “for implementing modern skills into business practices and for effective communication wit its customers” and Geden Lines was recognised in the tanker category “for-recognition of asset play as en essential stratagy in modern-day shipping.”

The ship of the year award went to the PULI “for excellence in the Turkish shipbuilding industry”, Sedef took the shipyard award “for competing successfully with the world’s leading shipyards” and Yildiz Gemi scooped the yachtbuilding company award “for building on the Maltese Falcon- Turkish yacthbuilding combined with Italian flair at their best.”

Shipping financier Denizbank was recognised “for commitment and performance in Turkish shipping finance” and Marport picked up the por or terminal operator award “for denonstrating the effectiveness of private initiative for the efficiency of port operations.”

Turkon Holding won the shipping logistics company award “for its belief and achievements in meeting the international needs of Turkey’s exporters.”

Antmarin’s “courage and endeavour in salving the AFRODITE-S and preventing and environmental disaster” saw that company rewarded for achievement in safety or environmental protection and UN RoRo scooped the newsmaker award “for boosting Access to the western Mediterranean through an innovative venture with Grimaldi, Naples.”

This news is a total 3085 time has been read