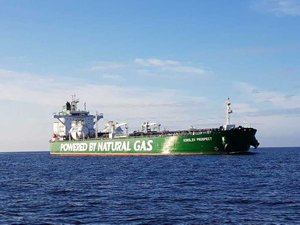 One of the key takeaways from DNV GL’s Maritime Forecast 2050, Energy Transition Outlook 2020 is that installing a dual-fuel LNG engine and fuel system “is consistently the most robust choice” for preparing shipping for a decarbonised future

“Gas is the best choice for one or two vessel generations,” said DNV GL Maritime chief executive Knut Ørbeck-Nilssen, during a virtual press conference unveiling the study. “We talk about gas – it is not only about LNG, but also LPG.”

By starting with a dual-fuel engine and fuelling system, shipowners have the possibility of transitioning to ‘drop-in’ lower carbon intensity future fuels. The study says that “picking the wrong solution can lead to significant competitive disadvantage. Planning for fuel flexibility could ease the transition and minimise the risk of investing in stranded assets.”

LNG has been gaining traction since the enactment of IMO 2020 0.50% sulphur cap. LNG-fuelled ships represent less than 1% of the operational fleet, but almost 10% of newbuilds.

Lead author on the study Tore Longva said the use of LNG as a fuel in combination with energy efficiency gains and speed reduction would support a 20% reduction in CO2 emissions. “It is a fairly good option for the first generation of ships,” he said.

“The pathway to decarbonisation is really a journey,” said Mr Ørbeck-Nilssen. “Reducing greenhouse gas emissions is rapidly becoming the defining decision-making factor for the future of the shipping industry. The pressure to act decisively is mounting.”

While LNG is not the perfect solution, Mr Ørbeck-Nilssen said it is a good one. Shipping needs to make progress to meet IMO’s ambitious decarbonisation targets – a 40% reduction in carbon-intensity by 2030, while pursuing efforts towards 70% by 2050.

Quoting Voltaire, Mr Ørbeck-Nilssen said, “Perfect is the enemy of good,” emphasising that there is no time to wait for the perfect solution.

While the use of fossil LNG is expected to continue to gain market share, it will face phase out towards mid-century as emissions regulations tighten in 2030 or 2040. Less carbon-intensive fuels bio-MGO, e-MGO, bio-LNG and e-LNG will emerge as drop-in fuels for existing ships, according to DNV GL’s models. By 2050, e-ammonia, blue ammonia and bio-methanol are expected to gain favour as carbon-neutral shipping fuels.

The study models 30 scenarios resulting in widely different outcomes for the fuel mix in the fleet.

One of the surprising outcomes of the study was that there was limited uptake of hydrogen as a ship fuel, as a result of both the estimated price of the fuel and the investment costs for the engine and fuel systems. Hydrogen, however, plays an integral role as a building block in the production of several carbon-neutral fuels such as e-ammonia, blue ammonia and e-methanol, all of which gain significant uptake under the decarbonisation pathways.

This news is a total 2746 time has been read
Tags: LNG dual-fuel engine a 'robust choice' for shipping's decarbonisation