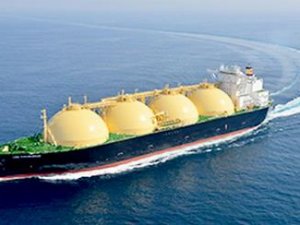 KEPCO President and Director Yagi named the new Moss-type carrier, and his wife acted as the ship’s godmother.

The LNG Fukurokuju will serve a broad range of projects including the Australia/Pacific LNG Project after its delivery slated for 2016.

Once completed, LNG Fukurokuju will be the largest ship in its class that can pass through the expanded Panama Canal.

The vessel adopts a new steam turbine engine that reuses steam for heating, which will also reduce fuel consumption, and an advanced heat insulation system that offers the lowest LNG vaporization rate – 0.08% – of any LNG carrier in the world. Its environment-friendly, economically-advanced design also effectively controls surplus boil-off gas.

MOL signed a long-term contract for two LNG carriers with Kansai Electric Power in 2012. The second ship is being built by Mitsubishi Heavy Industries and is expected for delivery in 2017.

The second vessel has a 155,300m3-class cargo tank capacity, and is one of the Sayaendo series carriers developed by Mitsubishi Heavy Industries, featuring a continuous cover over its four Moss-type spherical tanks.

This news is a total 2307 time has been read
Tags: kawasaki, heavy, named, lng, fukurojuku, turkishmaritime Qatar Launches Largest LNG Shipbuilding Program in History at Korean YardsState-owned Qatar Petroleum has entered into shipbuilding agreements with South Korea’s “Big 3” shipyards for the construction of up to 100 LNG carriers valued at more than US$19 billion.