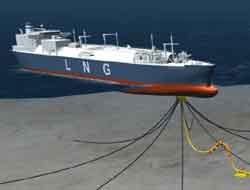 The license will allow Neptune LNG LLC to build, own, and operate the Neptune offshore LNG delivery system in Massachusetts Bay.

The Maritime Administration is responsible for issuing a Deepwater Port License under the Deepwater Port Act of 1974. Sean T. Connaughton, Maritime Administrator, stated, "I conclude that the construction and operation of the Neptune deepwater port will be in the national interest and consistent with national security and other national policy goals and objectives, including energy sufficiency and environmental quality."

The deepwater port license provisions include an agreement to train and employ U.S. officers and crews aboard SUEZ LNG tanker fleets, including all vessels serving U.S.-based SUEZ LNG facilities.

The Maritime Administration says it will work to establish similar commitments with other deepwater port license applicants for planned projects throughout the United States.

"We are eager to move forward with this project, and this license enables us to do so," said Zin Smati, President and CEO of SUEZ Energy North America. "Meanwhile, we have delivered a letter of intent to occupy office, storage, and dock space at the Gloucester Marine Terminal in Gloucester, Massachusetts, in support of our Neptune activities. In addition, we are making progress on our commitment to the Maritime Administration and others to lead the industry in promoting employment opportunities for U.S. mariners on LNG vessels, having already found a number of qualified candidates who potentially could join our team."

In December 2006, SUEZ committed to promote job opportunities for U.S. mariners on both its existing fleet of LNG ships serving the U.S. and on the vessels to be used for the Neptune deepwater port.

The Neptune project will fill a growing need in Massachusetts and New England as demand for natural gas in New England is expected to increase by 1 to 2% per year over the next two decades, with Massachusetts alone accounting for half of the region's natural gas consumption. At this rate of growth, the region could face a shortage of natural gas supply approaching 500 million cubic feet per day in the year 2010 unless new capacity is added. The Neptune project is being developed to provide between 400 and 750 million cubic feet of natural gas per day Ð enough to serve 1.5 million to 3 million homes daily. Neptune LNG anticipates having a fully operational project, including construction of a lateral pipeline connection to HubLine SM, the existing sub-sea pipeline, specially designed ships, and the LNG supply to serve customers in Massachusetts and the rest of New England in 2009.

Dirk Beeuwsaert, CEO of SUEZ Energy International, said, "SUEZ has more than three decades of LNG experience worldwide. With this approval, SUEZ has cleared an important hurdle and is able to further strengthen its position as a key LNG player in the Atlantic Basin."

The Neptune terminal will be based on the LNG Shuttle and Regasification Vessel System (SRV) developed by Hoegh LNG.

The ships will be equipped to store, transport, and vaporize LNG into natural gas that can be sent to customers using the existing HubLine SM sub-sea pipeline.

The LNG carriers will be moored at the deepwater port by means of a submerged unloading buoy system consisting of two buoys.

A ship will typically be moored for four to eight days while unloading its LNG cargo, depending on market demand. The two separate buoys will ensure that natural gas can be delivered in a continuous flow by having a brief overlap between arriving and departing LNG carriers.

The estimated cost for the project, including LNG ships built specifically to meet Massachusetts' rigorous environmental standards, the buoy system and the connection to the HubLine SM pipeline, is approximately $1 billion. Neptune's location has several important benefits. It does not require any precious coastal land, and also limits aesthetic impacts. Additionally, the site offers the necessary water depth to support the buoy system technology while specifically avoiding the Stellwagen Bank National Marine Sanctuary and essential shipping lanes into Boston Harbor.