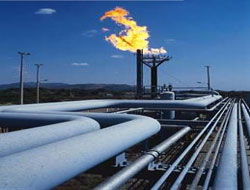 Croatia's liquefied natural gas (LNG) terminal project must move faster or risk been sidelined by similar projects in Italy, the head of a consortium formed for building the terminal said on Friday.

Croatia's liquefied natural gas (LNG) terminal project must move faster or risk been sidelined by similar projects in Italy, the head of a consortium formed for building the terminal said on Friday.

After two years of mulling, the Zagreb government last month picked a location for the terminal on the northern Adriatic island of Krk. The LNG project is aimed at reducing central Europe's dependency on Russian pipeline gas.

"There are three LNG projects going on in Italy at the moment, which have all necessary legal and administrative authorisation. It seems that Italy has the ambition to become a major gas hub of southern Europe," Michael Mertl, who heads the Adria LNG consortium, told in an interview.

"To be more successful (than Italy) in this competition, we have to be faster and more competitive," Mertl said.

According to local sources close to the project, Croatia's partners have not been happy with the speed so far. Mertl said the consortium was now "satisfied and encouraged" by the government's decision about the location.

"We also hope that we will soon come to an agreement about the remaining open issues, primarily about the conditions of participation of Croatian companies in the consortium," he said.

The local partners, who will have up to 25 percent in the consortium, include oil concern INA, state power board HEP and gas company Plinacro.

Discussions about the exact percentage and voting mechanism in the consortium have slowed down the signing of a crucial joint venture agreement.

"The sooner they join the consortium, the sooner we will be able to develop jointly a sustainable business plan for the terminal," Mertl said.

Mertl said he hoped that all prerequisites for obtaining the location permit would be met in the second half of 2009, so that the construction could begin in 2010 and the terminal would become operational in 2014.

But he said it was equally important to quickly secure, amid growing competition, long-term contracts for gas supplies, which will be up to each shareholder in the consortium.

The value of investment for the Krk terminal, with a capacity of up to 15 billion cubic metres of gas per year, is estimated at 800 million euros ($1.03 billion).

Mertl said another important step for the project is a study on environmental impact and the consortium would "properly address all concerns of the local community."

Local environmentalists, concerned about pollution of the tourist Adriatic coast managed several years ago to block the Druzhba-Adria oil pipeline project aimed to connect Russian oil fields with the island of Krk.
LNG, gas cooled to a liquid state for shipment on tankers, is reheated on arrival at a terminal and pumped into pipeline grids.

This news is a total 895 time has been read