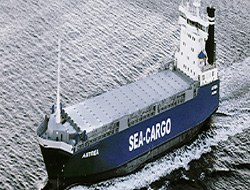 A Norway based shipping company has ordered two RoRo (roll on/roll off) vessels that will run on liquefied natural gas (LNG).

LNG powered multipurpose RoRo vessels would be ?the first ever designs of their type?

A Norway based shipping company has ordered two RoRo (roll on/roll off) vessels that will run on liquefied natural gas (LNG).

Sea-Cargo AS said the vessels were being built in India as part of an order for four ships, due for delivery in 2009 and 2010.

?With focus on reducing exhaust emissions from short sea and coastal vessels, Sea-Cargo identified liquefied natural gas (LNG) as the future fuel of choice,? said Sea-Cargo in a statement this month.

The company said it believed that the LNG powered multipurpose RoRo vessels would be ?the first ever designs of their type.?

The LNG powered vessels will use Rolls-Royce engine technology. ?Rolls-Royce can offer LNG propulsion systems from the bunkering flange to propeller thrust,? said the shipping company.

?These RoRo vessels are a major breakthrough, both in the application of LNG fuel for merchant vessels and in the way the [?] Rolls-Royce single engine single screw mechanical drive solution works,? said the company statement.

?An important end result will be a very large reduction in emissions compared with a similar ship using liquid fuel. CO2 emission will be reduced by about 20%, NOx by about 90%, particulates negligible and sulphur oxide emissions will be zero.?

?These new vessels put Sea-Cargo in the forefront in offering efficient and flexible sea freight services with the minimum of emissions per tonne-kilometre of cargo transported,? the company said.

Sea-Cargo AS operates a fleet of multipurpose RoRo vessels, primarily on North Sea routes linking the west coast of Norway, mainland Europe and the United Kingdom.

Rolls-Royce has been a leading player in developing marine engines that run on LNG.

The European Union (EU) has been backing the Marine Fuel Gas Logistics project (Magalog), which has been exploring the potential of LNG as a bunkler fuel.

?There are lots of potential applications for LNG. It could be used in short-sea shipping, fishing vessels or by the coastguard,? said Maglog project co-ordinator Jorg Straussle last year.

LNG has been identified as suitable fuel for vessels operating on the same route for long time periods.

The Magalog project has identified a number of Scandinavian ports as possible LNG bunkering terminals.

This news is a total 862 time has been read