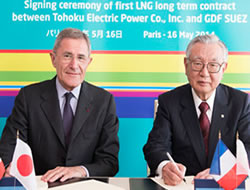 GDF SUEZ and the Japanese utility company Tohoku signed on 16 May 2014 in Paris a long term LNG sale and purchase Heads of Agreement. Under this new agreement GDF SUEZ commits to deliver 270,000 tonnes per year (tpa) of liquefied natural gas (LNG) to Toho

Volumes will be supplied with natural gas from the US which will be liquefied in the Cameron LNG plant. GDF SUEZ will be one of the first companies to supply Asia with American LNG, thanks to its LNG carrier’s fleet and a diversified LNG portfolio.

The Cameron LNG export project the partners of which are GDF SUEZ, Sempra, Mitsubishi and Mitsui has received conditional approvals from the US Department of Energy (DOE) and partial agreement from the Federal Energy Regulatory Commission (FERC) and is likely to be finally sanctioned within the course of this year.

Jean-Marie Dauger, Executive Vice-President of GDF SUEZ in charge of the Global Gas & LNG business line commented: “This sales agreement seals our first long term LNG sale with a Japanese partner, as well as the emergence of US LNG contributing to Japan energy supply, thanks to the benefit of the shale gas revolution in America. Such a contract shows how GDF SUEZ strategy is right in the heart of the present world energy challenges.”

GDF SUEZ has the third largest LNG supply portfolio in the world, supplied from six different countries, and representing 16 million tonnes per year. It controls a large fleet of 14 LNG carriers under mid and long term charter agreements.  The group has also a significant presence in regasification terminals around the world, including FSRUs and in liquefaction projects.

This news is a total 1940 time has been read