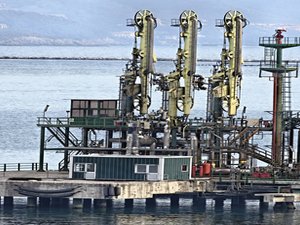 Projects that sell LNG linked to the price of oil will be under pressure with crude between $50 and $60 a barrel, and more than $60 billion in cash flow may be affected this year, Wood Mackenzie Ltd. said in an e-mail on Feb. 4. Projects with more than $100 billion of investment are at risk of delays or cancellation, according to the Edinburgh-based consultant.

“We’ll see a marginal tightening in the market,” said Leigh Bolton, managing director of Holmwood Consulting, a Surrey, England-based energy consultant. “Some of the projects will disappear entirely while some of them will be deferred for three to five years.”

Brent crude added 74 cents to $54.90 a barrel on the London-based ICE Futures Europe exchange at 9:53 a.m. Singapore time. Oil may fall below a six-month forecast of $39 a barrel and rallies could be thwarted by the speed at which lost shale output can recover, Goldman Sachs Group Inc. said last month.

Long-term LNG contracts can be priced off by up to 15 percent of oil prices, according to a Jan. 5 report by Bloomberg New Energy Finance. Spot LNG prices fell to their lowest since June 2010 at $7 per million British thermal units on Feb. 4, according to data from New York-based Energy Intelligence’s World Gas Intelligence publication.

“From 2018 to 2022, the market is very well supplied as there are new U.S. and Australian projects ramping up,” Nicholas Browne, Wood Mackenzie’s senior manager for primary fuel research said in a phone interview last month. “Producers will be affected because costs are sunk into projects whereas the returns they get are significantly less as the lower oil price works its way into contracts,” said Browne.

Costs in Asia, the region that buys the most supercooled fuel, will this year average below $10 for the first time in four years as new projects in Australia and the U.S. boost supply through 2016, Bloomberg New Energy Finance said.

“Low oil price is good for the LNG business because it drives out the unsuccessful projects,” said Bolton.