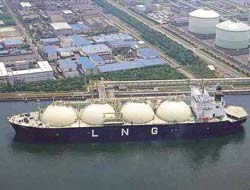 Pacific Trail Pipelines (PTP) had proposed a pipeline project to move up to 1 billion ft³ per day of natural gas from Summit Lake to Kitimat LNG Inc's proposed LNG export terminal in Kitimat.

The Kitimat to Summit Lake Pipeline Looping Project (KLS Project) needs approval under the Canadian Environmental Assessment Act before it can move along.

Federal authorities last week issued a go-ahead decision, saying that ?with appropriate mitigation measures?, the project ?is not likely to cause significant adverse environmental effects?.

The KSL Project entails the construction of approximately 463 kilometres of 36 inch diameter pipeline and compression facilities.

The Kitimat terminal is slated to have facilities for storage, loading, delivery and liquefaction.

According to a press release, PTP, a 50/50 partnership between Pacific Northern Gas Ltd. and Galveston LNG Inc., the parent company of Kitimat LNG Inc., was formed for the purpose of developing the KSL Project.

Greg Weeres, vice president operations and engineering for Pacific Northern Gas said,"We are very pleased to have these major environmental approval processes completed successfully and look forward to delivering the many potential benefits this project would bring to our existing customers, to First Nations located in the Summit Lake to Kitimat area and to our shareholders.?

Kitimat LNG Inc. has already received provincial and federal permits and certificates for the construction and operation of the terminal.

Mitsubishi has tentatively agreed to buy 1.5 million tonnes per year of terminal capacity and acquire a minority equity interest in the terminal.

This news is a total 4103 time has been read