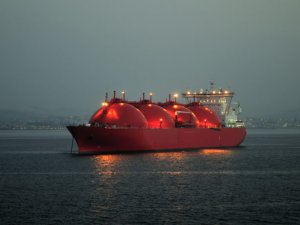 Liquefied natural gas traders are expected to take a page from the oil market playbook: Storing the fuel at sea while prices languish near historic lows in a bet they can profit when demand peaks this winter.

The amount of LNG in storage aboard tankers, which is already at a seasonal high, is expected to expand further as firms take advantage of ample supply, cheap freight and a potentially lucrative pricing structure known as “contango,” according to analysts, traders and brokers surveyed by Bloomberg.

The trading strategy, used frequently in the oil market, tries to cash in on the contango structure, which arises when expected prices for the fuel months into the future are higher than now. In the Asian LNG market, benchmark futures for November delivery are trading at an 80% premium to current rates, which have wallowed near historic lows as the Covid-19 crisis slashes demand. Low freight rates are also incentivizing traders to buy now and sell later.

An explosion in futures and other derivatives for LNG is allowing traders to take advantage of the contango the way they have in oil for years, locking in higher prices and hedging their exposure if forward prices drop.

That current spread between September and December futures for the benchmark Japan-Korea Marker traded Thursday at $2.015 per million British thermal units on the New York Mercantile Exchange, slightly off a record earlier this week for the two contracts. At current charter rates and considering boil-off, it costs roughly 30 cents per million Btu to float a cargo per month, according to Simpson Spence Young.

Twenty-seven LNG vessels globally were identified as floating storage as of Wednesday, a summer record and a 50% jump from a week ago, according to Rebecca Chia, an analyst at commodities research firm Kpler. This current armada is due mainly to logistical delays caused by buyers struggling to make room for the arrivals as they’re sitting on high inventories due to the pandemic.

European onshore gas storage sites may run out of space earlier than usual as facilities are almost 84% full, a level typically seen by mid-September.

As many as 50 cargoes could be floating by late-October, compared to 33 the same time last year, as traders start to take advantage of arbitrage opportunities, said James Waddell, a senior global gas analyst at Energy Aspects Ltd.

“A combination of persistent, low spot freight rates and a cargo forward curve that is in contango is encouraging traders to explore floating storage opportunities,” said Tim Mendelssohn, the managing director of Spark Commodities, which tracks tanker rates. “This window of opportunity to lock in cheap freight to justify the storage play may be short lived” as rates are forecast to rise “significantly” in the coming months, he said.

Traders surveyed by Bloomberg also warned that the current contango structure could collapse if forecasts for colder winter weather start to fade or economic recoveries from Covid-19 reverse amid a resurgence of cases. As well, the contango play for LNG has a narrower window than oil as the supercooled fuel evaporates faster than other liquid fuels.

Floating storage for LNG typically tends to be limited to about three months in order to avoid degrading the cargo and maintaining its specifications, said Oystein Kalleklev, chief executive officer of Flex LNG, another shipowner.

And while charter day rates for LNG vessels are roughly 40% lower than this time last year, floating a cargo over a number of months is still a costly endeavor. Only those that view shipping as a sunk cost or have a flexible portfolio can make floating storage work, traders said.

Most likely to benefit from floating storage are the large merchants who can shift cargoes around to meet their obligations, James Whistler, the global head of energy derivatives at SSY, said by email.

“These types of players can get very creative to maximize their portfolios, using their full global reach to take advantage of temporal and locational spreads as they arise,” he said.

This news is a total 1334 time has been read
Tags: floating storage, LNG