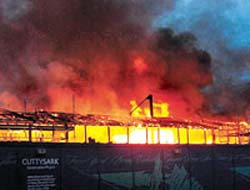 The fire that ripped through the historic Cutty Sark, causing millions of pounds of damage, may have been started deliberately, police said on Monday.

London’s Cutty Sark fire may have been arson

The fire that ripped through the historic Cutty Sark, causing millions of pounds of damage, may have been started deliberately, police said on Monday.

"At this stage the fire is being treated as suspicious," said Superintendent Martin Mitchell of the Metropolitan Police. "We are carrying out a number of lines of inquiry." Police are checking security camera footage from the area and have appealed for witnesses to come forward.

The fire broke out 4:45 a.m. and quickly spread through the timber and iron ship.

Flames and thick black smoke shot high into the sky above the dry dock on the banks of the River Thames where the boat has stood for more than 50 years. Forty firefighters brought the blaze under control. Aerial television pictures showed a mass of charred timbers on the deck of the boat that was once one of the world's fastest ships. No one was injured.

"It's a tragedy. She was the Ferrari of the open seas," Paddy Pugh from the conservation body English Heritage told the BBC. "It's one of the genuine icons of London."

The Cutty Sark swapped the high seas for a concrete dry dock in Greenwich, home of Greenwich Mean Time (GMT), where it became a major tourist attraction.

The ship, launched in 1869 on Scotland's River Clyde to make the run to China for the lucrative tea trade, was undergoing a 25 million pound refurbishment.

Richard Doughty, chief executive of the Cutty Sark Trust, the body overseeing the renovation work, said Britain had lost part of its history. "To lose the timbers and iron frame of the ship is to lose not just maritime heritage but part of our national heritage," he said.

Half the ship's timbers had been removed for renovation before the fire. The figurehead, masts and ship's wheel were not damaged.

Originally designed to last just 30 years, the ship is a rare construction with a wrought iron frame clad in timber. Built for the tea trade, she was switched to fetching wool from Australia to feed England's mills, regularly recording the fastest time for the voyage from Australia to Britain. In 1885, she managed a record-breaking 72 days via Cape Horn.

The Cutty Sark Trust said it was still assessing the extent of the damage, but promised to rebuild the ship.

This news is a total 1060 time has been read