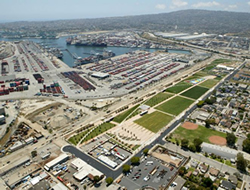 The Downtown Harbor “water cut” will create the necessary land and harbor infrastructure to accommodate the later development of a new town square and promenade on the water. The location, just north of the Los Angeles Maritime Museum, will become a centerpiece of the ongoing revitalization of the LA Waterfront.

“Over the next five years, we are investing $1.2 billion in capital improvement projects at the Port and creating approximately 20,000 jobs,” Villaraigosa said. “Because we have been able to grow green and responsibly, we are able to use Port funds for important community projects like this. I’m particularly proud that this is the first project to be built under the Port’s new Project Labor Agreement, which will ensure safe, quality projects and job opportunities for local and disadvantaged residents.”

“Waterfront development, along with the arrival of the USS Iowa, will create a tourist and small business destination for the South Bay,” said Congresswoman Janice Hahn. “By investing in our unique waterfront, we are creating jobs today and a foundation for economic growth in the future.”

“This ground breaking signifies a new era for the LA Waterfront”, said Los Angeles City Councilman Joe Buscaino. “It is thrilling to see ongoing progress on our grand waterfront promenade. We are on our way to becoming a major tourist destination in the City of Los Angeles. This is how we will bring the sea to the City, and the City to the sea.”

“This crown jewel project – the first to be constructed under the approved San Pedro Waterfront plan – adds to the excitement and energy that is building along the LA Waterfront,” said Port Executive Director Geraldine Knatz, Ph.D. “We’ve got new parks, a new recreational marina and we’re getting ready for the USS Iowa and the opening of “Crafted at the Port of Los Angeles” artist marketplace. In addition to being the nation’s busiest container port, we are in the midst of building a world-class waterfront experience for residents and visitors.”

The Downtown Harbor project will cut into approximately 1.2 acres of existing waterfront land along Harbor Boulevard between Fire Station 112 to the north and the L.A. Maritime Museum to the south. It will create a new harbor inlet for vessels to dock and approximately 700 linear feet of promenade. Surrounding the inlet will be a modern town square, featuring landscaping, lighting and expansive promenades.

Materials excavated to make the new water basin will be used to fill the site of the Berth 200 West Basin rail project slated to begin later this year. By using the materials at the West Basin project instead of hauling it away, the Port will save as much as $8 million in dredge material disposal costs. The project marks the first time the Port is requiring the dredging process be done with electric equipment, significantly reducing emissions.

Since the Environmental Impact Report (EIR) for the Downtown Harbor development project was approved in 2009, a series of public workshops were held to gather feedback from the community and to finalize design concepts. As a result of the feedback, several design elements were changed, including adding more open space, widening the promenades and improving the physical and visual connectivity with downtown San Pedro. A public art display is also planned for the site.

The Port of Los Angeles is America’s premier port and has a strong commitment to developing innovative strategic and sustainable operations that benefit the economy as well as the quality of life for the region and the nation it serves. As the leading seaport in North America in terms of shipping container volume and cargo value, the Port supports more than 830,000 regional jobs and $35 billion in annual wages and tax revenues.

This news is a total 3040 time has been read