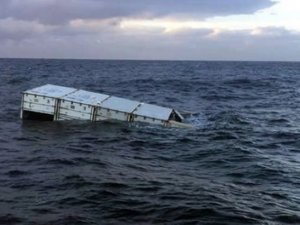 Authorities in the UK are continuing to monitor the response to an overboard container incident in the Bristol Channel in southwest England.

The incident was first reported October 20 when eleven containers were lost overboard from a passing containership that has not yet been identified.Read our Turkish page

According to the Torridge District Council, five of the containers contained non-hazardous cargo and six were empty.

Some of the containers have likely sunk, but several have washed ashore or been spotted in the water. On October 26, one container washed ashore at Bucks Mills in north Devon and another today washed up on the beach of Aberthaw Power Station near Breaksea Point.

At least three have been discovered in the water and were either recovered or are being monitored. As a result, the HM Coastguard is continuing to advise vessels in the area to keep an eye out for floating containers in the water.

“The Council is committed to protecting our beautiful coastline and we immediately instigated our emergency response procedures – the Public should be assured that this matter is in hand.

There may be local disruption to access and parking at Bucks Mill while the clean-up works are being carried out, but access to the SW coastal path will be maintained.

We remain in contact with the MCA regarding any further groundings in our district and we really appreciate the public’s understanding in this matter.”

This news is a total 4291 time has been read
Tags: container incident , Deha24 , Bristol Channel , England