Low demand and capacity withdrawal to persist for container shipping 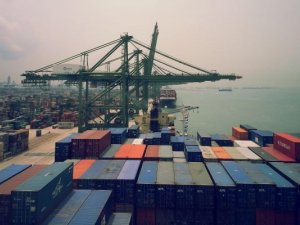 With the IMF recently updating its outlook for the global economy revising a negative 3% recession for 2020 to a deeper minus 4%, demand for global container shipping is anticipated to take a hit.

The Euro area saw GDP growth projections drop from an already low of negative 7.5% to negative 10.2%.

“This is especially concerning since the region will drive demand to fill the newest generation of ultra-large container vessels,” said Alan Murphy, ceo of Sea-Intelligence.

The number of blank sailings announced for Q3 increased from just 13 in week 20 to 76 in week 25 and then to 82 in week 26 (current week). However, this development is not uniform across the major East/West trades.

“On the Asia-North America West Coast trade lane, there has been a sharp decrease in blank sailings as blank sailings are getting reinstated. While this is not due to a structural improvement on the trade, it is more so as a result of either carriers pulling out too much capacity from the trade in the first instance, or US importers fulfilling short term needs by using a faster US West Coast service instead of a US East Coast service with considerably longer transit times,” Murphy explained.