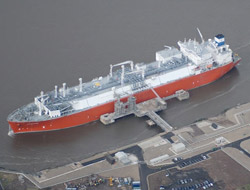 However the company says of the current LPG market: “Despite a slow start of the year the Midsize market remained firm, driven by weather delays on Ammonia shipments ex Black Sea as well as active Transatlantic and Indian LPG trading. Petrochemical gas opportunities also contributed to a satisfactory quarterly result. Overall cover for the balance of the year 2007 amounts to about 68 % at rewarding levels.”

But it also notes: “As anticipated VLGC returns have been disappointing. A tight Middle East LPG supply situation due to crude production cutbacks and plant outages generated substantial idle time. Mild winter conditions added to less long-haul requirements and maintained a severe pressure on VLGC freight levels. Although moderate, there are signs of recovery on both product supply and longer-haul trading potential.”

The company’s LNG activities contributed US$8.3m to the EBIT over the first 3 months of the year compared to US$6.6m.for the same period in 2006). In February the first commercial Ship-to-ship transfer of a full cargo of LNG was performed in Scapa Flow from LNG Excalibur to the LNGRV Excelsior. Excelsior Inaugurated Excelerate Energy’s Teesside GasPort by discharging part of the cargo alongside directly to the UK National grid system.

The company says: “The operating result for the balance of the year is expected to remain in line with the results of the first quarter.”

This news is a total 2177 time has been read