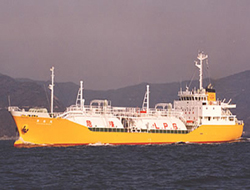 UK-based independent maritime adviser predicts a recovery in LPG carrier rates, only to be followed by another slump next year.

UK-based independent maritime adviser predicts a recovery in LPG carrier rates, only to be followed by another slump next year.

IN its recent LPG Insight magazine, Drewry notes that rates have gone from a record high to record low in six months. The Baltic LPG Index for Vlgc rates AG-Japan maintained a record peak level of $64.857 between the 14 and 18 July 2006. Exactly six months later on the 18 January this year it fell below the previous record low of $23.458/tonne which had been set in March 2003. The index kept falling to a low of $19.357/tonne on 1 February.

The adviser explains: “The main cause of the precipitous fall has been a lack of available cargo to export from the Middle East. The situation was exacerbated by the delivery of eight new Vlgcs to the fleet in 2006, compared to just two in both 2004 and 2005, a warm winter and high stock levels.”

Drewry comments: “The collapse in rates has been quicker and deeper than anyone predicted last summer. Hopefully a restoration in export levels from the AG will see rates recover sooner rather than later this year. However, the rates on offer now could well be visited again in 2008 and 2009 as an unprecedented number of Vlgcs are due to be delivered to the fleet, whilst many of the LNG projects they were ordered against are slipping.”