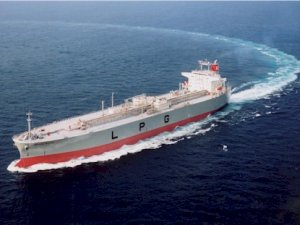 A tanker carrying liquefied petroleum gas (LPG) that had been anchored off Singapore for almost three weeks set sail for South Korea amid signs that demand for the fuel has increased.

A backwardated market, where prices for prompt delivery are higher than later-dated supplies, typically reflects that demand for a commodity has increased or supplies have declined.

According to Ginga Petroleum, propane prices on a cost-and-freight (CFR) Far East basis between September and October reflected a 50 cents a tonne backwardation.

“The LPG market is getting better as demand growth will soon keep up with supply growth,” said consultant Ong Han Wee of FGE.

The LPG market softened recently as exports to Asia from the Middle East rose in June to their highest this year.

The Middle East is Asia’s top LPG supplier followed by the U.S.

But growing demand for LPG, in the form of butane or propane used for heating, cooking, transportation, petrochemical production, will soak up supplies especially when the Northern Hemisphere winter begins, said two oil product traders familiar with the market.

The higher demand will increase the supply deficit in the Far East by 10 percent next year to about 42.5 million tonnes, , said Yanyu He, director of natural gas liquids research at IHS Markit.

This news is a total 626 time has been read
Tags: LPG tanker sails for South Korea after market shift signals higher demand