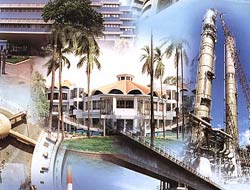 Confident that the present economic downturn will not hit its ambitious Rs 2,000 crore shipyard plan near Chennai, Larsen and Toubro (L&T) said that to begin with it they would start building naval ships, particularly frigates and warships. "Our shipbuilding plans are not focussed on the kind of ships where the demand is low. We are not focussed on shipbuilding as a total specturm. We are not looking at bulk shipping. We are looking at niche areas of shipbuilding," L&T Board Member M V Kotwal told PTI. "We would start with a lot of naval ships such as warships and frigates. We want to build this yard with the most advanced system. At present, Navy's demand is unfulfilled," he said.

Last year, L&T signed an agreement with the Tamil Nadu Government to set up a shipyard in Kattupalli, near Chennai, at a cost of Rs 2,000 crore.

Justifying the move to build naval vessels, Kotwal said, "We have got a very good position with regard to naval equipment is concerned. Navy has been quite positive on indigenisation in lot of things."

If you look at the long term, Navy has definitely got a plan. There will be a large requirement much exceeding the capacity, he said.

"That is where we see a definite potential," Kotwal said.

This news is a total 1145 time has been read