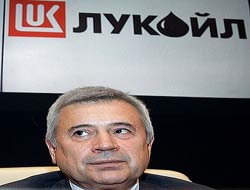 Russian oil giant Lukoil has agreed to pay more than $500 million for Turkish petrol and petroleum products distributor Akpet, the firms announced in ?stanbul on Monday.

Russian oil giant Lukoil has agreed to pay more than $500 million for Turkish petrol and petroleum products distributor Akpet, the firms announced in ?stanbul on Monday.

Lukoil President Vagit Alekperov did not disclose the terms of the deal, only saying that his firm would pay "slightly more than" half a billion dollars for Akpet, whose 693 petrol stations account for some 5 percent of the Turkish market. Lukoil Eurasia Petrol, A.S., a wholly owned Lukoil subsidiary, will run Akpet.

Akpet facilities include eight oil terminals with a total capacity of 300,000 cubic meters, five LPG depots, three jet fuel depots and a lubricants production and packaging plant in ?zmir's Alia?a with a capacity of 12,000 tons per year.

Six of its eight oil terminals are on the coast and can accommodate oil tankers, and three terminals are connected by pipeline to the Turkish Petroleum Refineries Corporation (TÜPRA?), the former state-owned refinery bought by Koç Holding in 2005. Of licensed fuel distributors in Turkey, Akpet ranks sixth in terms of market share, third in terms of storage capacity and second in terms of number of depots.

Asked if the sale represented a move toward upstream oil production for the Turkish distributor, Akpet Chairman ?smail Aytemiz said no, that there was no need for such activity with Lukoil as the parent company. "We are a distribution company and will remain one, but with much greater resources from being connected to a world class producer like Lukoil," said Aytemiz.

Lukoil, Russia's largest oil producer, will supply its new Turkish retail network from the Lukoil Neftokhim Burgas Refinery in Bourgas, Bulgaria, and another operated in Sicily as a joint venture with Italian oil company ERG. The Bourgas refinery will supply petrol and aviation fuel, while the ISAB refinery complex in Priolo, Sicily, will mainly supply kerosene and diesel fuel.

Lukoil is wasting no time piecing its strategy together. The company only last month in Rome signed the agreement to buy 49 percent of the Sicilian refinery complex. "The Russian oil company began talks with Akpet some months ago, at first planning to buy half the company," said Aytemiz. "Then it changed to 51 percent, then to a total buyout."

Akpet started in business in 1997 under the family name of its founder, Aytemiz, only changing the brand name to Akpet in March 2006. The Akpet oil terminals are situated from the extreme west to the farthest corner of northeast Turkey, with terminals in ?zmit, Alia?a, K?r?kkale, Hatay, Batman, Mersin and Hopa.

Parent company Lukoil is the second largest oil company in the world, after ExxonMobil, earning over $11 billion in profit on greater than $90 billion in sales. The company claims to be Russia's largest taxpayer and to have paid $28 billion in taxes last year.

Lukoil is a privately controlled company traded on the London and Moscow stock exchanges. Its market capitalization now stands at $92.5 billion. Alekperov and fellow Lukoil executives control some 30 percent of the stock. ConocoPhillips holds a 20 percent stake and minority shareholders control the remaining 50 percent.

Alekperov closed his remarks with condolences for the terrorist bomb attack in Istanbul the previous evening, saying that he hoped Turkey would continue to grow and prosper and to be a shining example of a functioning democracy for the region and the world.

This news is a total 2514 time has been read