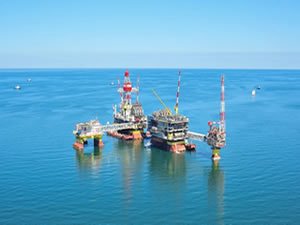 Russian oil and gas company Lukoil has completed the acquisition of Petronas’ interest in the BP-operated Shah Deniz natural gas project, located in Azerbaijan’s sector of the Caspian Sea, effectively raising its stake in the project.

However, Lukoil and Petronas signed in December 2021 amendments to the agreement concluded in October, reducing the share acquired by Lukoil from 15.5 per cent to 9.99 per cent with a proportional decrease in the transaction value from $2.25 billion to $1.45 billion. In its latest update on Friday, Lukoil announced the completion of the transaction, which allowed it to acquire a 9.99 per cent interest in the Shah-Deniz gas project from Petronas for approximately $1.45 billion.

Therefore, Lukoil increased its share in the project from 10 per cent to 19.99 per cent.

Located in the Azerbaijan sector of the Caspian Sea, 70 kilometres southeast of Baku, the Shah Deniz gas condensate field is implemented under a PSA and the commercial production started in 2006.

In 2018, the second stage of the project was launched, with annual production expected to reach 26 bcm of gas and 5 million tonnes of oil and gas condensate.

The gas from Shah Deniz is sold on the markets of Azerbaijan, Georgia, Turkey and Europe.

When it comes to the latest developments related to this project, it is worth noting that the Shah Deniz consortium started production from the East South flank at 540m water depth in July 2021.

Consisting of four wells, two new flowlines, and a number of subsea structures connected to the world-class Shah Deniz reservoir, the new East South production flank was expected to be at full production rates in the third quarter of 2021.

Based on the available records, the Shah Deniz consortium extracted 22.7 bcm of gas and 4.2 million tonnes of oil and gas condensate in 2021.