MacGregor Prepares for an Autonomous Future 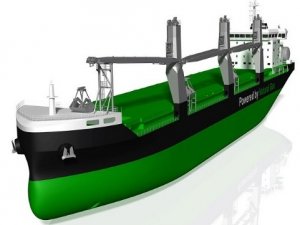 At the SMM 2018 conference in Hamburg, MarEx editor-in-chief Tony Munoz spoke with Michel van Roozendaal, president of cargo and load handling firm MacGregor, about his company's latest investments in technology.

MacGregor is looking to the future, and is designing new "smart" systems that will complement autonomous vessels.

MarEx: What are the most important developments in shipping today?

Last night I was at the SMM opening listening to IMO Secretary General Kitack Lim. It's quite exciting that IMO has decided to aim for a 50 percent reduction in greenhouse gases from 2008 to 2050, and it made me wonder: how can you achieve that? Ships are already quite efficient. A 20,000-TEU ultra large container vessel is probably the most efficient way to move cargo from Shanghai to Rotterdam.

If you switch to LNG, perhaps it will be a little bit cleaner, but it doesn't necessarily give a large reduction in greenhouse gas emissions. If you go electric, there is not necessarily a recharging point for your ship in the middle of a voyage. That is simply a reality. But the fact that IMO is going for that 50 percent target means that they have some ideas on how to get there.

MarEx: How does MacGregor's work fit into these developments?

MacGregor and its sister companies, Kalmar and Cargotec, are focused on reducing inefficiencies and waste, like idle time spent waiting in port. This has the potential to reduce a shipment's overall greenhouse gas footprint. We think about the cargo's overall transit time from door to door, not just its time on board a ship.

Autonomous vessels can be a part of reducing that waste, too, and we are very engaged in this effort. If you have an autonomous vessel, but you still need a crewmember to operate the crane, you still have to make space on board for that individual. To be fully autonomous, these ships will also have to have autonomous subsystems. We are working with a number of companies on this, and here at SMM, we are showing our new autonomous bulk handling cranes. Together with ESL Shipping Oy, we are developing and testing the world's first self-learning, autonomous discharging cranes.

Autonomous vessels will be a journey. It's not like one day you will suddenly have a crewless ship sailing from Asia to Europe. It will start gradually, perhaps with small ferries on defined routes, and it will be tested at a modest scale. MacGregor is right in the forefront of this effort as the technology develops.

MarEx: How could this help meet the IMO's CO2 targets?

If you have fully autonomous vessels, you could go for the ultimate in slow steaming, because you no longer have a crew on board. At very low speed, less than 10 knots, then you can start to look at alternative energy sources. This might not work for consumer goods, but for bulk cargoes that are not time sensitive, it might be viable. If it's a longer supply chain for bulk, it does not matter, as the cargo still gets there in the end.

I'm from the Netherlands and proud of our seafaring heritage, and people did exactly this with sailing ships. In the very long term, one way to get to a low carbon footprint would be to return to sail power to move bulk cargoes at low speed.

What's most important is a level playing field. If we decide, as mankind, that we want to ship goods from A to B, and we want to do so in a sustainable way, then if everybody plays by these same rules and everything gets a bit more expensive, we should be prepared to pay for that.

MarEx: Can you tell us about MacGregor's recent investments?

We're very commited to this industry, and we've recently announced our acquisition of TTS, which is a sign of our confidence in the shipping business. We also acquired Rapp, a Norwegian company that serves the fishing industry. We are involved in every segment of cargo handling in the maritime sector, including the offshore oil and gas and offshore wind industries.

This news is a total 692 time has been read
Tags: MacGregor Prepares for an Autonomous Future