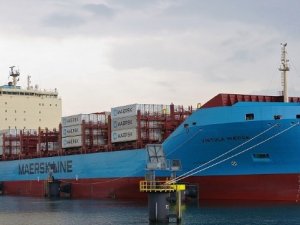 Top ocean carrier Maersk Line is planning to test the waters of the Northern Sea Route.

This week, the newly built sub-Panamax Venta Maersk will head north from Vladivostok for a voyage to St. Petersburg, skipping the Strait of Malacca and the Suez Canal.

Maersk confirmed to media on Tuesday that the vessel will make a "trial passage" above Russia to gather data and determine the operational feasibility of the route. "Currently, we do not see the Northern Sea Route as a commercial alternative to our existing network, which is defined by our customers' demand, trading patterns and population centers," the firm said in a statement.

A Maersk spokesperson noted that the passage is currently usable for only three months per year, though this "may change with time." In addition, the voyage requires ice-classed vessels, which are more costly than standard commercial designs. The Venta Maersk fits this requirement because she is designed for service in the ice-prone Baltic Sea, where she will remain after her first voyage from Asia.

MOL and Cosco have also conducted limited voyages along the Northern Sea Route, and Russian firms have used it for decades. However, it has not yet attracted large-scale commercial interest beyond project cargo and site-specific shipments, like westbound equipment for the construction of Yamal LNG and the same facility's eastbound exports to Asia. Due to climate change, the route's navigability is expected to improve, and seasonal transits across the pole could be viable by mid-century.

To capitalize on the region's potential as a maritime corridor, Russia recently created a new Northern Sea Route Directorate, which is tasked with leading regional infrastructure development. Moscow has also discussed imposing shipping restrictions along the route to bolster its own merchant fleet: Vice Prime Minister Yuriy Borisov recently told Pravda that Russia wants to give Russian-registered vessels an exclusive right to "transport and store hydrocarbons within the Northern Sea Route."