Maersk Calls for Action as Stranded Seafarers Rise to 400,000 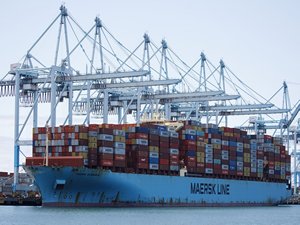 The world's largest container shipping companies and the United Nations Secretary-General are appealing to governments to resolve a labor crisis that has stranded400,000workers on boats,according to a new estimate from the International Chamber of Shiping

The world’s largest container shipping companies and the United Nations Secretary-General are appealing to governments to resolve a labor crisis that has stranded 400,000 workers on boats, according to a new estimate from the International Chamber of Shipping.

“I am worried that in respect of crew changes, little is going to change in most nations without action being taken at the very highest political level,” Henriette Hallberg Thygesen, chief executive officer of fleet and strategic brands at A.P. Moller-Maersk A/S, the container shipping giant, said in a UN General Assembly meeting Thursday to discuss the ship workers long overdue for relief. “We need actions now, immediate and real, from governments and national authorities,” she said.

As the pandemic drags on and the number of seafarers stuck at sea climbs, calls to resolve the crisis are getting louder. At the United Nations meeting, officials expressed concerns that seafarers are being forced to work against their will and that the global supply chain is at risk.

A Bloomberg investigation found numerous violations of international maritime law designed to protect seafarers, including allegations of unpaid overtime and insufficient medical attention. More than 120 countries or territories have stopped or limited access for ships to conduct seafarer changes in a bid to prevent the spread of the novel coronavirus that’s killed almost 1 million across the globe.

While many shipping lines have managed piecemeal crew changes, the backlog of crew swaps has far outpaced relief efforts. Following an open letter from the CEOs of Unilever Plc, Procter & Gamble Co. and other consumer goods companies warning of disruption to the global supply chain if the seafarer crisis isn’t resolved, UN Secretary-General Antonio Guterres asked governments to designate seafarers as “key workers” to ease their travels at borders and ports, adding that some had been on ships for more than 17 months. In addition to those stranded at sea, the ICS estimates another 400,000 are waiting on shore to relieve them, often with little or no pay.

“We could well see a million seafarers adversely affected in the coming months,” said Guy Platten, Secretary General of the organization, which represents 80% of the world’s merchant fleet.

“The situation is unsustainable and at a breaking point.” Some individual governments have begun to take action.

Beginning Oct. 1, the Australian Maritime Safety Authority will detain ships where workers have served aboard for more than 13 months and where there’s no approved plan for their repatriation in place.

France set up a national crisis unit to help with requests from shipowners in trouble, allowing at least 15,400 seafarers to transit through French soil, a minister said at the UN meeting. But progress is slow, and the situation is likely to get worse before it gets better.

If nations don’t respond to the humanitarian crisis, disruptions to the global supply chain could force action. “When the ships stop, so does everything else,” Marc Engel, Unilever’s chief supply chain officer, said at the UN event.

This news is a total 2927 time has been read
Tags: Maersk Calls for Action as Stranded Seafarers Rise to 400, 000