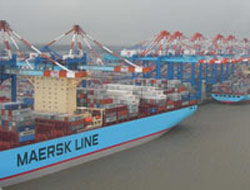 MAERSK Line is clawing back market share after losing ground over the past couple of years as it struggled with the integration of P&O Nedlloyd.

MAERSK Line is clawing back market share after losing ground over the past couple of years as it struggled with the integration of P&O Nedlloyd.

The world"s number one container line saw its grip on fleet capacity slide from 18.2% immediately after the purchase of the Anglo-Dutch lines to around 16% as it released or sublet ships.

During that time, fast-growing Mediterranean Shipping Co and CMA CGM took advantage of the Maersk"s predicament to greatly increase their market shares.

But in recent months, Maersk has begun to fight back, according to new figures released today in AXS-Alphaliner"s report on liner market shares.

These show that the AP Moller-Maersk fleet is set to break through the 2m teu barrier this month, representing a doubling of capacity since December 2004.

Over the same period, MSC"s fleet capacity increased by 4.2% , while CMA CGM"s rose by 2%.

The survey also shows that Evergreen, now the world"s fourth biggest line after sliding from second place in 2000, continues to go backwards. Market share has shrank by 14% to 5.3% last year, while it"s orderbook is the smallest of any of the top 20 lines.

AXS-Alphaliner, part of AXSMarine, attributes Maersk"s ?remarkable comeback? to a change in management and strategy, as well as a massive number of ship deliveries in the first few months of the year which saw the arrival of 20 newbuildings with total capacity of 113,000 teu. Some of these joined the Maersk Line fleet, while others went to sister line Safmarine.

?The bad days are now over,? AXS-Alphaliner believes. ?Maersk Line now seems to have a well-balanced fleet in terms of vessel size, compatible with the particular pattern if its hub and spoke network.?

However, the ASX-Alphaliner report warns that Maersk"s market share may now stagnate again, or even slide, as the wave of deliveries comes to an end. Ordering activity has also slowed in recent months, but Maersk is not the only line to put the brakes on new ship investments after the 2007 frenzy when an estimated $53bn was committed.

New figures out this week from Clarkson Research Services puts the value of new orders in the first quarter at $5.3bn, down 60% on the corresponding figure for 2007.

As a result of light ordering in the first quarter, the containership orderback has fallen back slightly to 58% of the current fleet, according to Clarksons.

Maersk has orders of 456,000 teu in the pipeline, somewhat less than those of either MSC or CMA CGM, and so will not be able to maintain its current market share of just over 16% without vigorous chartering activity, says AXS-Alphaliner.

But there is still a big gap between the the world"s number one carrier and its nearest rival, MSC, which had a market share of 10.4% at the start of the year after overseeing fleet growth from 225,000 teu at the beginning of 2000 to 1.2m teu just eight years later.

Furthermore, MSC"s orderbook through direct ownership or long-term charters is estimated at a colossal 620,000 teu, while the Geneva line also has a track record of buying secondhand ships.

CMA CGM has also put on a remarkable performance as market share trebled from 2.4% top 7.6% in the eight years to January 2008. While this has mostly been achieved through organic growth, there have also been some acquisitions including Delmas.

The French line has an orderbook of 592,000 teu that should see it continue to gain market share, with its fleet on course to expand by 66% between now and 2011.

Hapag-Lloyd has risen up the ranks after buying CP Ships in 2005, and now has the world""s fifth biggest fleet and an orderbook that will see it grow by almost 30% over the next four years.

But the German line now at the centre of takeover speculation will face trouble maintaining market share as the Chinese pair China Shipping Container Line and Cosco Container Line both have far larger orderbooks.

At the start of the decade, the top three of Maersk, Evergreen and P&O Nedlloyd together controlled 24% of the world boxship fleet..

This news is a total 911 time has been read