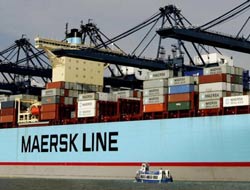 The Copenhagen group established a presence here in 1996 when it set up Maersk Line.

The group's subsidiary, APM Terminals, has terminal operations in every continent except New Zealand and Australia. It is the third largest terminal operator in the world, with a network of more than 45 ports.

It is understood that the company is interested in buying terminals here to improve and streamline the flow of containers from port to ship.

As a global operator of container terminals, it studied all world markets for opportunities for its customers but it had no specific comments on the New Zealand or Australia market, APM Terminals told the Business Herald.

But "in large locations, it is important that you secure infrastructure, where you have got a steady flow of goods to your ship".

Analysts said it would make sense for AP Moller Maersk to own terminals in New Zealand and not have to worry about sharing them with other operators, thereby ensuring a quick turnaround of ships.

AP Moller Maersk has been renowned for its secrecy and does not often reveal more than what is required of it by the Copenhagen Stock Exchange.

New Zealand is understood to be the only country where the company talks openly with the media.

The company's executives have reportedly said that Maersk should control as many of the companies that influence its containers' movement from country to country.

Maersk carries about 60 per cent of the containers for New Zealand's overseas trade, says the New Zealand Importers Institute.

The shipping line decided last November to put the bulk of its product through the Ports of Auckland, at the expense of Port of Tauranga. Port of Tauranga said the change would cost it $1 million a month in revenue.

Industry observers have said it was a move to destabilise the merger of the two companies (Port of Tauranga has since withdrawn from formal merger talks) because it could remove Maersk's ability to play the ports off against each other.

Since January, when Maersk's new contract came in, Ports of Auckland has suffered from congestion issues. Gibson admitted its level of service was not where it wanted it to be, but he was passionate about the fact that New Zealand's supply chain had become more efficient and effective.

"We have got to recognise that the supply chain is our Achilles heel and as a country, unless we protect that, we will struggle as time goes by."

He said Maersk was in constant dialogue with key stakeholders to look at ways to improve the effectiveness of New Zealand's supply chain.

* All ports have container terminals that are used to transfer goods on and off ships.

* Container terminals have marshalling and stevedoring services and information about ship operations.

* AP Moller Maersk's subsidiary APM Terminals is the third largest operator in the world with a network of 45 ports.

This news is a total 1061 time has been read