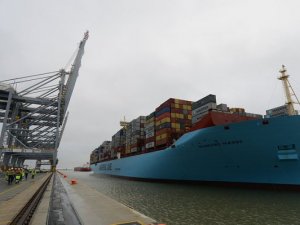 Since a February low, investors who held on to their Maersk shares despite declining oil and freight rates — the two parameters that determine the company’s fate — are now about 24 percent richer, measured on total returns. As of Tuesday, only four of the 29 analysts covering Maersk recommended selling the stock. Seventeen are advising clients to buy while eight are telling investors to hold on to existing shares.

Brent crude’s 75 percent jump from a Jan. 20 low is supporting Maersk’s oil business. And though the container market is struggling, consolidation is set to underpin freight rates and support the industry, according to Frans Hoyer, an analyst at Jyske Bank A/S.

“I believe container lines will start acting more responsibly and not compete so fiercely on rates after adapting to the new situation of low growth,” Hoyer said by phone. “Looking at the rest of the year, I believe we’re facing a gradual recovery in container line profitability, which could support the Maersk share. That’s also one of the reasons we’re positive on the stock.” Jyske is among banks advising clients to buy.

Maersk traded as much as 4 percent higher on Tuesday and was up 2.3 percent as of 12:31 p.m. in Copenhagen. Its return potential is about 12 percent above the current trading price, according to the average of analyst estimates compiled by Bloomberg.

Back in January, the sudden plunge in oil prices and the prospect of further declines in freight rates made the future look bleak for Maersk, whose shares sank 27 percent last year. Sydbank A/S characterized the development as the “ perfect storm” for the shipping and oil conglomerate.

The development “could also help the market and the likes of Maersk Line in particular,” Hoyer said.

Maersk shares soared earlier this month after the company reported a smaller decline in first-quarter profit than estimated, following deeper cuts at its oil unit. After cutting 1,300 jobs, the division targets 20 percent in cost cuts by the end of the year, compared with 2014 levels. The unit cut its operating expenses, excluding exploration costs, by 21 percent in the quarter.

“Maersk has also surprised the market with the extent of the cost reductions in the oil division,” Hoyer said.

This news is a total 4500 time has been read
Tags: Maersk Investors Get 24% Richer as ‘Perfect Storm’ Warning Ends