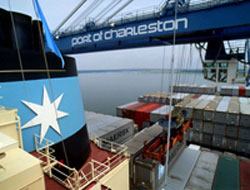 Maersk Line has decided to leave the Port of Charleston, opting to transfer its services to other regional ports.

Maersk Line has decided to leave the Port of Charleston, opting to transfer its services to other regional ports.

Maersk Line has decided to leave the Port of Charleston, opting to transfer its services to other regional ports over the next two years rather than take on a powerful US dockers" trade union.

The South Carolina port, which has been seeking to establish a niche in the face of stiff competition from regional rivals such as Savannah, would lose about one-fourth of its container volume as a result of the defection, including the immediate loss of some 100 ships a year as Maersk begins its drawdown in early 2009.

South Carolina State Ports Authority chief executive Bernard Groseclose Jr said in a statement that the authority ?hopes to welcome Maersk back to Charleston at some point in the future?, and expressing his confidence that the two dozen-odd other carriers in the port would ?continue to be very successful?.

Maersk"s decision would end a presence that dates back half a century. It comes a week after International Longshoremen"s Association locals in Charleston expressed opposition to the carrier"s preference to transfer its terminal operations to another site where it could use non-union workers.

Maersk, which is a concessionaire at a dedicated space in Charleston"s Wando Welch terminal with a lease that runs through to the end of 2010, has been forced to pay ?shortfall fees? to the landlord port this year, as cargo volumes shrivelled and operating costs began to bite.

In October the carrier threatened to pull out of Charleston unless ?a path which enables profitability? could be found.

Despite having an enforceable contract the harried ports authority came up with two alternative solutions at Maersk"s request, as the line sought the authority"s help in containing costs. One would have reduced Maersk"s space at Wando Welch, with the landlord repossessing some of the more than $8bn infrastructure that would then become surplus.

The other option was to shift Maersk to a ?common-use area? in the yard, where non-union employees would handle its cargo. Maersk said it preferred the second option.

Mr Groseclose said this common user gate model is preferred by ?more than half the business currently moving through the port?.

However, members at three ILA locals last Thursday overwhelmingly voted against the carrier"s choice, saying their wage costs were competitive and comparable with non-union workers, and protesting the impending loss of ?dozens of union jobs? because of the carrier"s decision.

Maersk said in a statement on Thursday: ?The ports authority offered us a workable solution, but we needed the consent of local ILA to accomplish the move. [Since the union refused], we are forced to move.

?By moving to other regional ports, we will once again be able to compete on a level playing field with other ocean carriers while continuing to provide excellent service to our customers.?

Maersk moving service to other nearby ports

Maersk is moving one service, the South Atlantic Express, representing about 25% of its Charleston business, to ?other nearby ports? in early 2009. The remainder of the business would be moved out ?strategically? over two years, and the carrier does not intend to renew when the lease runs out at the end of 2010.

Maersk said this model placed it at a competitive disadvantage compared with rivals that use common user gate areas.

Mr Groseclose said: ?This port, our region and our state will suffer greatly from Maersk"s departure. This will mean great losses for our economy at a time when we can least afford it.

?However, we will work tirelessly to backfill this area with new business and keep as much of that cargo moving through Charleston as we can.?

This news is a total 1101 time has been read