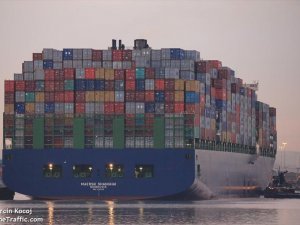 The world’s largest container shipping company, Maersk Line, has issued a statement regarding the loss of containers from one of its vessels during the nasty storm that slammed the U.S. East Coast over the weekend.

The 324-meter cargo ship Maersk Shanghai was underway from Norfolk, Virginia to Charleston, South Carolina when the crew contacted the Coast Guard late Saturday night to report that they had lost 70 to 73 cargo containers due to high winds and heavy seas approximately 17 miles off Oregon Inlet, North Carolina, according to a Coast Guard report on the incident.

A representative for Maersk Line provided a statement to gCaptain confirming that the 70 to 73 containers had collapsed and an investigation is underway to determine the extent of the incident.

The full statement from Maersk Line is below:

We can confirm that on March 3th at 20:15 EST the vessel Maersk Shanghai, reported between 70 – 73 containers collapsed and/or were lost overboard due to poor weather at sea when in route to Charleston, South Carolina. The vessel is currently at anchor in Charleston with the surveyor and US Coast Guard on board to assess damages to cargo and vessel. Once the survey is completed we will coordinate a plan to secure berthing and needed resources to work normal cargo ops, including damaged units. We will be in contact with all customers with direct impact to find the best solution for the handling of their cargo.

All crew members on board are safe and accounted for. No effect on environment has been reported at this time.

Maersk Shanghai is an 10,081 TEU container vessel built in 2016 and currently sailing on Maersk Line’s TP11 service. The vessel is flagged in Liberia.

According to the National Weather Service, last weekend’s nor’easter produced hurricane-force winds and significant wave heights upwards of 40 feet in parts of the western Atlantic off the mid-Atlantic coast.

According to a 2017 survey of ocean carriers by the World Shipping Council (WSC), an average of 1,390 containers are lost at sea each year based figures from 2014 to 2016. This number includes ‘catastrophic events’, where more than 50 containers are lost during a single event.

While it only takes one container hiding just below the surface to sink a boat, the number of containers lost at sea represents just a small fraction of the more than 100 million containers that are transported across the world’s ocean every year.

The WSC’s survey, which is considered the most accurate report on the subject, was first conducted in 2011 to provide the best estimate as to the actual number of containers lost at sea and to debunk false claims that as many as 10,000 containers fall off ships each year.

This news is a total 986 time has been read
Tags: Maersk Line Addresses Loss of Containers from Ship Off U.S. East Coast