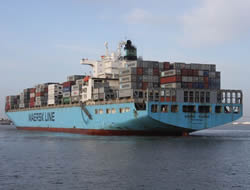 Now in their ninth year, the awards honour individuals, organisations and companies in the shipping industry from across the region. Also described as the ‘Oscars’ of the maritime world, this year the awards were presented at a glittering gala dinner held at the Atlantis the Palm in Dubai. In attendance were more than 750 of the who’s who of the region’s maritime and shipping industry.

Shane Sawyer, Director of Business Performance Management for Maersk Line’s West Central Asia (WCA) Region, received the awards on behalf of Maersk Line. He was delighted to collect not only the “Ship Owner/Operator Award” but also one of the most esteemed awards of the evening, the “Shipping Company of the Year Award”.

“It is a proud moment for Maersk Line to be recognised for understanding and facilitating the growth in trade between emerging markets including Asia and Africa, Asia and South America, and intra-Asia routes.”

In comments from the judges, the Ship Owner/Operator Award was given based on Maersk Line’s network size, volume growth, reliability, environmental performance and safety record. “Their vessels operating in the Middle East call at strategic ports and the cargo delivery to emerging markets indicate a volume growth despite the global slump in the shipping industry. Their monetary guarantee of timely delivery of shipment is proof that they are dedicated to ensuring their customers are satisfied with their services. Furthermore, their CSR activities and safety procedures in place make them world-class ship owners,”said the official statement.

Similarly, the Shipping Company of the Year Award was based on “the way in which they have responded to the growth in trade between emerging markets, and the increasingly important transport corridors between Asia and Africa, Asia and South America and intra-Asia. Maersk reshuffled its networks to introduce new services based upon these new realities, and in the process has grown its cargo volumes to and from emerging markets by 15%.”

Omar Shamsie, Regional Chief Executive for WCA comments: “It is a proud moment for Maersk Line to be recognised for understanding and facilitating the growth in trade between emerging markets including Asia and Africa, Asia and South America, and intra-Asia routes. In our region, Seatrade Awards are an important event in the Maritime calendar. To me, winning these awards say a lot about how well our efforts are recognised by the industry and by our customers. It shows that we are making an impression and a very good one at that. We should all be proud of this achievement and strive to maintain our position and do better.”

This news is a total 6898 time has been read