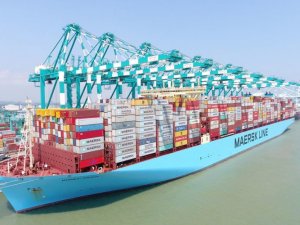 Maersk says it has secured a $5 billion revolving credit facility that will be tied to its environmental performance.

The sustainability-linked credit facility has been secured through a syndicate of 26 banks. According to Maersk, the credit margin will be adjusted based on Maersk’s progress to meet Maersk’s ambitious environmental target of reducing CO2 emissions per cargo moved by 60% by 2030, which is significantly more ambitious than the IMO target of 40% based on a 2008 baseline.

Maersk says the facility refinances the undrawn $5.1bn facility maturing in 2021 and has a tenor of five years which may be extended by up to two years.

“We have received strong support from our global relationship banks. The facility was substantially oversubscribed, and we are pleased with the terms and conditions of the new facility. With the new facility we have extended the maturity profile of our finance commitments, while aligning with our sustainability ones,” highlights Henriette Hallberg Thygesen, CEO of Fleet & Strategic Brands.

Maersk in 2018 made a commitment to become carbon neutral by 2050, a plan that would require significant investments in the short term for research and development in new technologies and fuel sources.

“We are determined to reach our ultimate target of becoming fully carbon neutral by 2050, and this agreement serves as another enabler for us to deliver on that ambition,” said Henriette. “Given the lifespan of our fleet, we need to find new and sustainable solutions to propel our vessels within the next 10 years. To realize this ambitious commitment, we are partnering with researchers, regulators, technology developers, customers, energy providers – and now banks.”

The International Maritime Organization has set an initial strategy to reduce greenhouse gas emissions from shipping by 50% by 2050 compared to 2008, while simultaneously pursuing efforts towards phasing them out entirely. The strategy envisions reducing CO2 emissions from international shipping by at least 40% by 2030 and up to 70% by 2050 based on the 2008 baseline. The initial strategy is due to be revised by 2023.

This news is a total 71520 time has been read
Tags: maersk