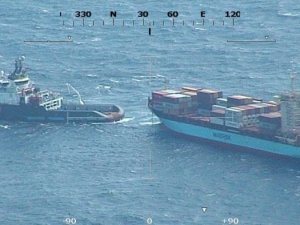 A Maersk Line containership suffered an engine room fire that left the ship adrift in the Caribbean Sea off the coast of Guadeloupe.

The 1,800-TEU Maersk Vilnius was traveling to Port Elizabeth, South Africa from Freeport, Bahamas when the fire broke out.

The fire was eventually brought under control and extinguished with no injures suffered by the ship’s crew.

The Alp Defender later arrived on scene to bring the containership undertow. AIS ship tracking data shows the ALP Defender has a destination of Manzanillo, Panama.

“The vessel remains at sea in a safe area. Required firefighting measures were promptly deployed by vessel’s crew and fire has been extinguished. Vessel power has been restored, including the power to reefer units on board,” Maersk Line said in a statement.

The M/V Maersk Vilnius was built in 2010 and is registered in Singapore.

This news is a total 550 time has been read
Tags: Fire Incidents, maersk